I too can learn Artspeak 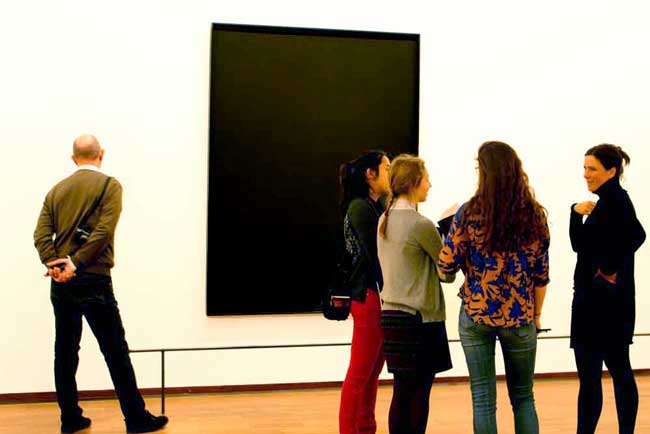 An art teacher tries to explain to her bemused students the meaning of one of Ad Reinhardt’s black paintings.

What can you say about a painting that’s solid black? If you talk in Artspeak, you can say quite a bit.

Artspeak is a language that Ana introduced me to in Vienna as we were checking out the contemporary art galleries. She didn’t want to see the Art History Museum, with its collection of the greatest number of masterpieces in the world. She’d studied them at university. But she did want to see what European artists of the modern era – roughly defined as World War I until today – had been up to.

So we first found ourselves in the Albertina Museum, looking at one of the black paintings of Ad Reinhardt, who is worshipped by a certain sect of the art community. When I say black paintings, I mean exactly that. The painting we saw (I did not note its title) was a canvas of flat black. What did Ad mean when he painted that? Thanks to Artspeak, we found out:

“Black paint has been applied to the canvas layer by layer in hardly discernable subtle shades. Its structure and materiality only disclose themselves to the patient and attentive viewer. The representational function of the picture as well as content, style and composition have fallen victim to the artist’s search for pure painting, for perfection. The use of black paint celebrates a zero point of all colour; the absolute reduction has come to an end: ‘The one, eternal, permanent revolution in art is always a negation of the use of art for some purpose other than its own,’ Reinhardt said. ‘All progress and change in art is toward the one end of art as art-as-art.’”

If the purpose of art is to make us think, then Reinhardt’s painting succeeded. Artspeak is probably the only language that could express the logic behind his black paintings. But I wondered: if the goal of the painting was the “end of art as art-as-art,” why the need for “hardly discernable subtle shades?” Why should a viewer have to be “patient and attentive?” Why not simply use a roller or, better still, a spray gun in an industrial paint shop, to produce a truly black painting that really would end all painting? And why would you “celebrate” a “zero point of all colour?”

The more I think about it, the more I disagree with that philosophy. The goal of art has never been the end of art. In ancient times through the present, it has been to portray the human interpretation of life. The ancients didn’t think of art as art. To them, their sculptures, their tools were votive objects that had specific functions in their everyday lives. Art still has that function. Now, though, it’s many layers of reality removed from everyday life.

See? The black painting did its job.

Artspeak also explained Markus Prachensky’s take on Los Angeles in the 1960s. To me, the painting we saw looked like a fat ass stuck in the air. But when I read the explanation in Artspeak, I realized what an idiot I was. Or maybe I was a genius, reducing the essence of artistic thought like a chef making the sauce for duck à l’orange. Whatever the case, here’s what we learned about the painting in Artspeak: 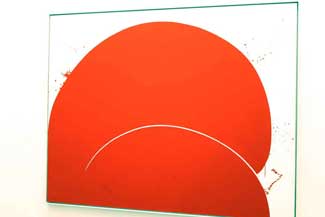 It still looks like a big red ass to me.

“The artist was not concerned with portraying the reality he had seen … His works are rather a reaction to the things seen, transformations of his personal experience into the medium of painting. … Prachensky’s language of forms, which is based on strictly chosen principles of composition, derives its extraordinary and unique clarity and reduction from the artist’s intense engagement with the American art of the 1960s.”

Again with the word “reduction.”

These are the kinds of things you think about after visiting a contemporary art gallery. Or at least, the artist would want to stimulate your thought process. Viewing contemporary art is for me like listening to good Baroque music, which we also heard in Vienna, or understanding someone express themselves in another language: it opens the pathways of the mind to new ways of thinking.

The best of the contemporary art we saw managed to do this without being didactic or precious. That art we saw at the Albertina and the Kunsthalle Wien accomplished this aim. The Painting 2.0 exhibition we saw at the Mumok (see the photo gallery for the translation) did not. 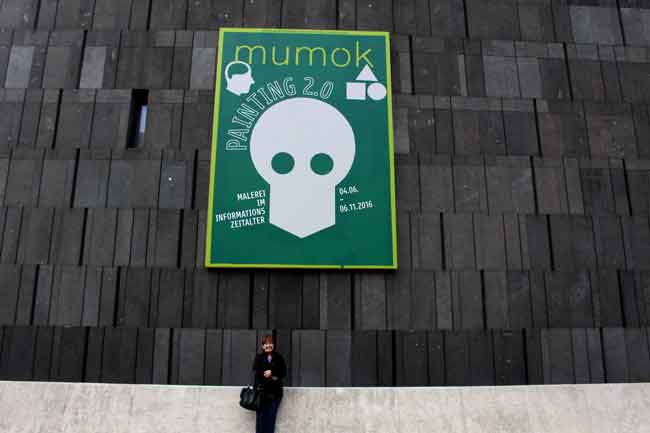 The Mumok looks like a bunker. It reminded me of the Jade Museum in San José, Costa Rica: a solid block of grey-black stone. It’s a good contrast to the classical palaces in the midst of which it’s situated. But it also warned us of a peculiar rigidity of thought that we found demonstrated inside.

I found it ironic that an exhibit that billed itself as “Painting in the Information Age” did not allow patrons to take photographs of the works. Information wants to be free; it doesn’t want to be imprisoned in an artistic bunker.

I appreciate that an artist might not want his or her works copied and distributed by barely-competent photographers like me. I understand that these are new, young artists; their work is not in the public domain. I get that they need an income to keep producing their work and that they, like any other human, will react to that need like Harold Ballard refusing to print players’ names on his NHL team jerseys because it would cut into program sales.

But don’t artists – especially artists who create in the most modern of styles – want their ideas widely disseminated? Do they not want to shock and challenge an audience much wider than the few thousands who will visit an important national gallery to see their work? If painting has been changed by the information age, the Mumok, for me, failed to get with the program in this exhibit.

Happily, the exhibit we saw at the Kunsthalle Wien next door did not share this philosophy. We were welcome to take all the photos we wanted to of the new work by Nathalie Du Pasquier, which you can see in the photo gallery for this article. For me, this is what art does best: it delights with its peculiar take on life and imparts some insight about the world around us. 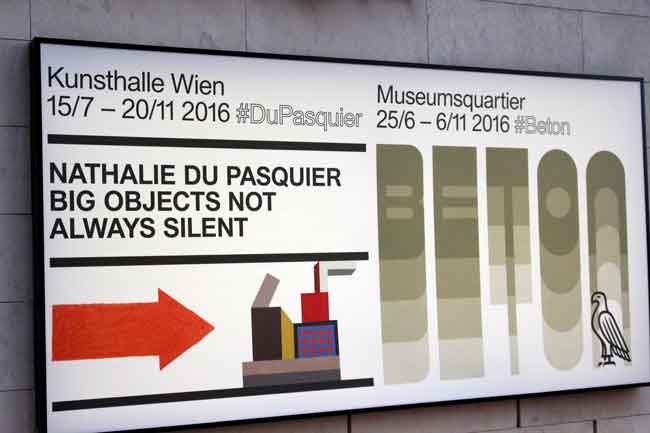 We moved on to the Leopold Museum, where there was a major exhibition of the Austrian painter Gustav Klimt, who died in 1918. The work (by Klimt and his protégé Egon Schiele) that left the most lasting impression on me evoked what must have been the hopelessness and helplessness behind the bravado of the First World War, especially in an empire that was in its death throes.

Looking at a few galleries might not sound like much, but these were big buildings and I figured we must have walked a few miles on hard concrete floors on our day in the Museum Quarter. But sore as we were, that wasn’t the real exercise.

To paraphrase National Lampoon’s Timber Tales, featuring Maurice (you gotta be both old and warped to remember this), Artspeak Make Maurice Head Spin. But with a bit of practice, I know I could learn to speak Artspeak too!