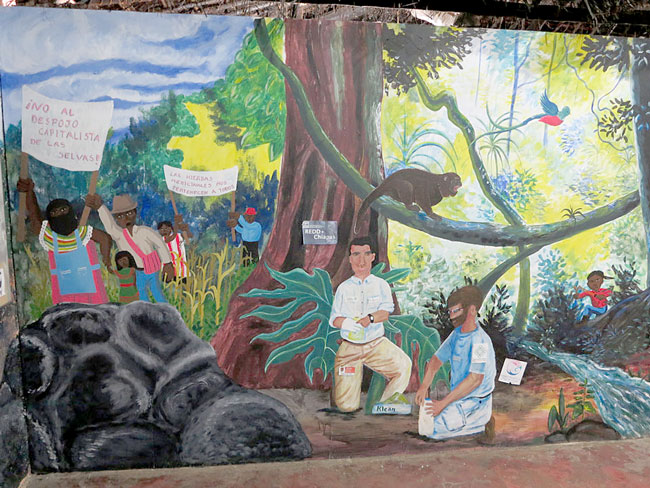 'No to the capitalist plunder of the forest!' reads the first banner, held by the Zapatista leader. 'Medicinal herbs belong to us all!' reads the second.

Situated on the northern edge of town, past the crafts market around Santo Domingo church and the mercado district, amid scattered auto-repair shops and small industries on a dirt road, hides the Museo de la Medicina Maya, a collection of low buildings and a garden that tell the story of Maya medicine in the voices of the Maya medical practitioners. 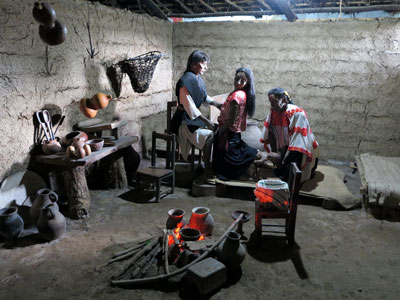 A display inside the museum depicts a traditional Maya birth, with the husband and midwife assisting.

(I managed to get us lost on our way — I blame an inaccurate tourist map — but a Maya woman selling corn from huge sacks kindly turned us in the right direction. As she told us we’d have a 20-minute walk, and we had already walked a half hour or so, we flagged a cab to go the rest of the way and it was a good thing we did. The museum wasn’t exactly well signposted. Our cabbie told us he was surprised we came here without being part of a tour.)

The museum was founded in 1997 by the Organization of Indigenous Medics in the State of Chiapas (OMIECH) to promote traditional Maya medicine in 38 communities. More than 600 traditional practitioners are members, including herbalists, bone healers, midwives, prayer healers and pulse readers.

The tour through the museum begins with a 15-minute video of the role of the midwife in traditional Maya births. I’ve read crtics who call the video dated, but it is quite remarkable in its description of the role of the midwife in Maya culture, mainly because it’s a Maya midwife who does the talking. She explains a common-sense approach to helping a mother give birth and then explains how the initial washing of the baby must be done a certain way, with the water moving from head to foot, to prevent evil spirits from entering the child. In a way, that’s common sense too: washing with a foot-to-head motion might make water go up the baby’s nose. 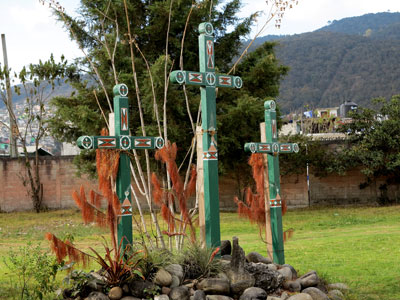 Traditional Maya crosses in the Museum's garden. Christian crosses were accepted because to the Maya, they illustrated the all-important four cardinal points.

“The land is the mother of universal life,” explains a printed guide which visitors can borrow as they tour the museum. “She is the goddess of the mountain and manages the cosmic forces: wind, rain, eclipses and earthquakes. Illness and hunger are manifestations of her anger. Evil and death attack from the four cardinal points of the cross, which are associated with the following colours: red with the east, black with the west, white with the north and yellow with the soputh.”

The healing ceremonies we were to see in San Juan Chamula were explained in the guide:

“The church is a sacred and therapeutic place in which the indigenous doctors, by means of prayers, cleansings, and the burning of candles and incense, cure the ill. …

“The healer makes offerings to the saints and spirits and gives them food. All of this is like a meal for the spirits who absorb the offerings given to them. Here the spirits live with the people.” 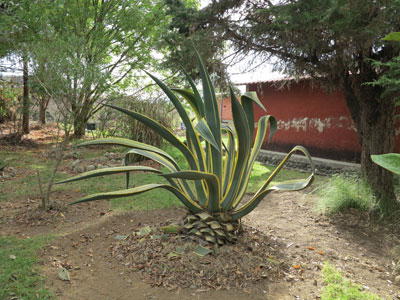 One of the medicinal plants on display in the garden.

Some well-crafted exhibits portray different aspects of Maya medicine, including a woman giving birth. Written explanations are provided in both English and Spanish.

Leaving the building, there is a mural of some indigenous people protesting as agents of multinational pharmaceutical companies extract samples of the medicinal plants in the jungle. The protestors are led by an EZLN (Zapatista Liberation Army) activist in her distinctive mask. She carries a sign that says “No to the capitalist plunder of the forest!” Two local people following her carry a banner which reads “Medicinal herbs belong to everybody.”

It was another indication of how politicized things were just below the surface here. It’s a combination of modern politics with traditional values that run deeply through the culture of the indigenous people.

In the garden just outside this building are various medicinal plants, some of which Ana recognized, and their uses. Another building, unattended when we visited, was an herbal pharmacy, with dozens of jars of plant compounds and a display which denounced the patenting of medicines.

Time was getting on and I was a tad concerned about being able to get a cab. But there was a man in the street cleaning a taxi inside and out as the driver sauntered up, whistling. We were his first fare in his newly-cleaned car.