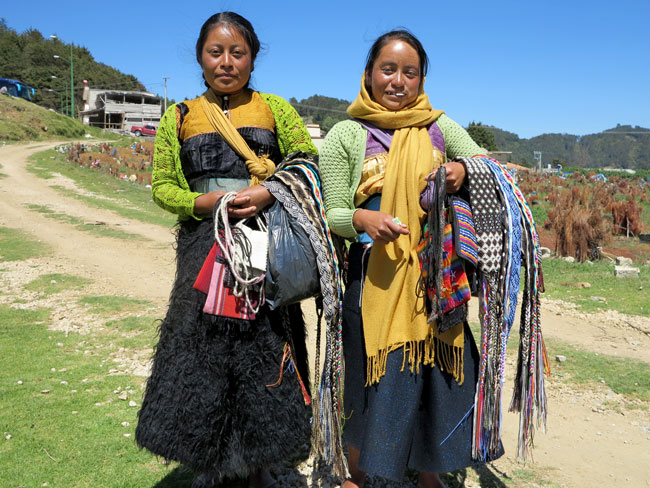 These two vendors agreed to have their picture taken in exchange for cash and purchase of souvenirs. I realize this is kind of incongruous, but I liked the photo!

Back in the 1960s, when I was very young, I used to enjoy Mexican vampire movies. They were scary in a different way. Mexico seemed to be portrayed in a fashion that made vampires all too believable. As much as they were scary, they were even spookier. There was an atmosphere of weirdness that seemed missing from American-made vampire movies; good as those were, you got the feeling from their Mexican cousins that vampires were a phenomenon which was not out of the ordinary south of the Rio Grande.

I got that same sense of spookiness yesterday when we visited the Templo de San Juan in San Juan Chamula, a traditional Maya village 10 km. from San Cristóbal. We took a small-group tour to the village, and I was glad we had a Maya guide. A lot of people here are very conservative and suspicious of outsiders, although tourism must be a fairly important source of income. 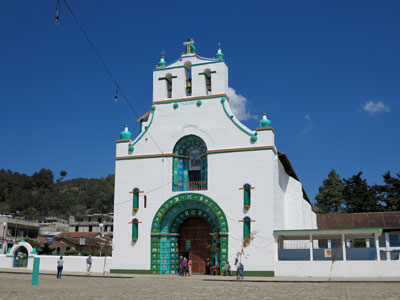 “Don’t take any photos inside the church or in the streets,” our guide warned us. “In the church, they have plain-clothes police. (I think he meant local vigilantes.) They look just like anyone else, but they will watch you all the time.”

From the outside, the church looked like any other you would see in Mexico, other than the fanciful designs around the main door. In front of it was a large plaza, where more than 20,000 people would congregate during the town’s Carnival in June. As we arrived in the courtyard, three men were in the belfry, clanging the bells in a discordant cacophony. They clanged for a couple of minutes, then stopped. The procedure was repeated twice more. Our guide told us not to take any pictures while this ceremony was taking place. Only when the clanging had stopped and the people around the entrance had dispersed were we allowed to take photos. 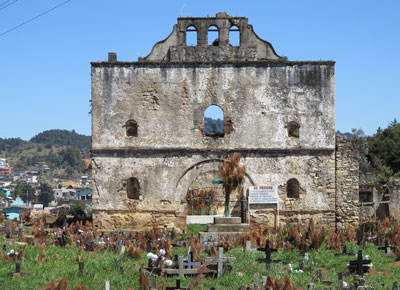 The ruins of San Sebastian church. Traditional Chomulans believe their town was founded by St. John and his brother, St. Sebastian, but after a disaster befell St. Sebastian's church, he went to live with his brother in the Templo de San Juan. The village graveyard surrounds the church.

Our guide’s injunction set the tone, and now we were prepared to enter the church. He admonished us to hide our cameras and take off our hats. “Yeah, yeah, yeah,” I thought. “Isn’t he carrying this a little far?”

We stepped through the church door and entered a world of magic and mystery. This was a church like none other we had ever seen. While the structure of the building was familiar, everything else was like stepping into a different world.

There were no pews, although that in itself wasn’t strange; many of the big cathedrals in Europe never had any. Bunting in traditional Maya patterns that hung from the ceiling. Dozens of cabinets along the walls contained statues and tableaus of the saints. But the kicker was the hundreds, if not thousands, of candles which burned brightly on tables in front of the displays, providing the main source of light.

The marble floor was spread with fresh pine needles or long grass (we weren’t sure which) that symbolized the fertility of the land and the life-giving plants that grew in the region. We had to be careful walking since the clippings made the footing extremely slippery. 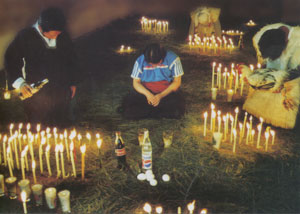 Unable to take photos inside the church, I bought this postcard from a vendor outside. There weren't quite so many candles on the floor in what we saw, but a very large number of them on tables around the church. The people praying were always in a small group and were much farther apart than shown here.

The sight of the candles was overwhelming. I had never seen so many in one place. They gave the church an eery atmosphere, with smoke rising like mist and an incense-like smell pervading the atmosphere. As we walked farther into the church, it just got weirder.

Small groups of Maya, kneeling on the marble floor, prayed and chanted as we walked by. The chanting was hypnotically repetitive. In some cases, a man would chant prayers in the ancestral language of the region; a monotone accompaniment from a woman provided a counterpoint to his lilting voice. In other cases, everyone was chanting the same words.

Together with the shamans of the village, they prayed for the health of family members and conducted rituals that they believed would cure their illnesses. Each group had stuck their own sets of candles into the joints between the tiles on the floor. 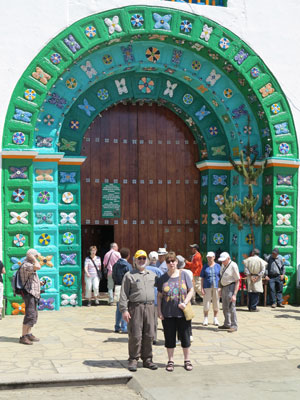 Happy to be back in the sunshine outside the Templo de San Juan.

The shamans diagnosed people by feeling their pulse and provided prescriptions according to what they felt. The candles used by the small groups varied in number and colour according to the group. Our guide told us they used different colour combinations for different illnesses, according to the recommendation of the shaman they were consulting. There were other components of the treatment: soft drinks (especially Coca-Cola), a vile local distillation called Pox (pronounced “posh”), eggs, dried fish, smoked meat and a hen or rooster, depending on the sex of the patient.

(Coke has become an integral part of Maya religious and medical practices. It is believed that burping expels evil spirits that cause sickness from the body.)

The hens and roosters are often sacrificed, right there in the church. The shaman wrings their neck and waves them over the sick person. Depending on the illness being cured, the worshippers might cook the fowl and eat it.

As you may have guessed, this is no ordinary Catholic church. There are no priests and no altar, just another table covered with candles where the altar would normally be. No masses are said. Worship and prayer is believed to be a highly individual process and no one is allowed to come between the worshipper and whatever god they are communicating with.

There might be a dozen or more of these small ceremonies going on at the same time, and they take place 24 hours a day, seven days a week. Sunday is only special because a regional market is held in the plaza in front of the church. 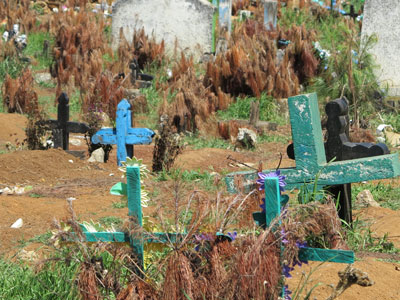 The graveyard outside San Sebastian church. Traditionally, black crosses were for people who died old, white for those who died young and blue for everyone else.

As we left the church, our guide invited us to walk through the village for half an hour but again warned us not to take any pictures. “If they see you taking pictures, they will attack you if they can.”

After the experience of the church, he didn’t need to warn us twice. On our walk, some of the people were quite friendly and helpful; others were suspicious and withdrawn.

The weird combination of Maya tradition and Catholicism comes from the Spanish conquest. The priests and conquistadores noticed the Maya were not taking to their religion, so they bent the rules to form a strange meld of the old and the new.

We had been told that animal sacrifices still took place in the Maya villages, but we were skeptical. After San Juan Chamula, we were skeptics no more.

Seeing the religious practices of the village, I could see how fighting vampires was not a big stretch.