Imagine a combination hippie haven, Zapatista hotbed, Maya cultural centre, lovely Spanish colonial capital and lively city that seems much bigger than its 60,000 people, and you have San Cristóbal de las Casas in a (run-on) sentence. 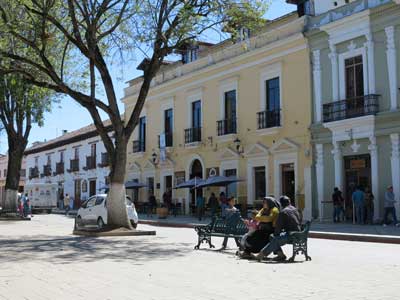 Hanging out in the Plaza 31 de Marzo (the zocalo) under sunny skies and temperatures in the mid-20s c.

We arrived in the late afternoon Feb. 12, to comfortable weather in the low 20s and stunning blue skies under a warming sun. At night, it got down to under 10 degrees centigrade. That was pretty much the weather until we left Feb. 16. It feels like we stayed there a lot longer.

I’m not as young as I used to be and I did notice the difference in altitude. San Cristóbal is only 6,500 feet above sea level, but it took a day or two to get used to the thinner air.

We saw a great number of cathedrals, churches and former monasteries, learning a lot from them about the strange fusion of Catholicism and traditional Maya religion that lives on to this day. It was fitting that in the last one we visited, which involved a steep climb of 100 steps or so as penance for our sins, a statue of Jesus was outlined in patriotic red, gold and green neon.

We visited a huge outdoor Maya crafts market where dozens of vendors displayed beautiful pieces of Maya weaving. Since San Cristóbal is so small, we just bumped into this place while wandering around the zocalo area. The market area is a square honouring the adoption of the Mexican constitution, and a significant church and an old monastery was right beside it. 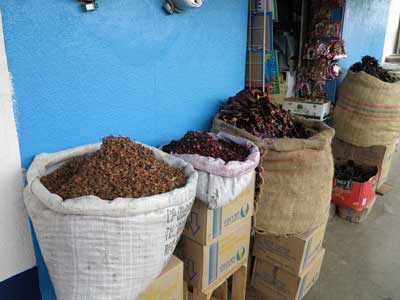 The mercado publico in San Cristóbal was more like an entire district of a dozen or more blocks. We got lost and a kind Maya woman gave us directions.

We toured a couple of Maya villages, seeing artists at work, partaking of traditional home cooking and viewing some religious practices involving liquor, Catholicism, Coca-Cola and animal sacrifice. Good thing we had a Maya guide, who warned us not to take pictures of certain things; he claimed people get assaulted on the street for using their cameras.

We spent a couple of hours at the Museo Na Bolom, where we learned about the couple who led explorations of the Maya ruins in Chiapas and the Lacondón rain forest, supporting and trying to protect the indigenous people and their environment.

We learned about the history and techniques of coffee cultivation at a small museum devoted to the drink, and Ana enjoyed many cups of the strong, delicious Chiapanesca coffee. I’m not supposed to have caffeine, but I couldn’t resist a sip or two whenever she had a cup. 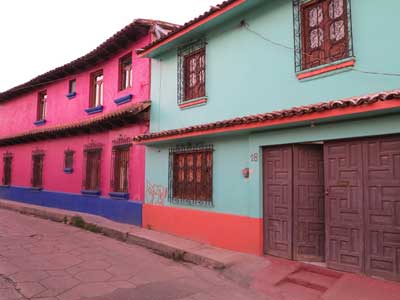 Leaving the Na Bolom museum, we got lost while taking pictures. Google Maps to the rescue!

We visited a couple of Zapatista hot spots and plugged in, however briefly, to the left wing political culture that seems fairly strong in the city. At the Zapatista souvenir store, a young woman, probably from one of the outlying Maya villages, was withdrawn and very quiet. But she finally looked at us and shyly smiled. They had a lot of Zapatista memorabilia you could not find in the “official” artisans’ market nearer to the bus station. At an attractive vegetarian restaurant/language school, a wall-sized graphic collage depicted economic slavery for Mexicans as a result of NAFTA. The waiters engaged us in learning the names of the foods, seemingly interested in learning the same names in English.

We enjoyed some fantastic Mexican cooking, indulging a little too much in fiery chiles and salsas on more than one occasion. I never thought you could get a food hangover, but I had a couple of them after some excellent dinners and lunches. There was a pretty strong vegetarian presence and once again, Ana experienced the contradictions of Mexican vegetarianism: they are genuinely concerned with serving you only vegan products if you ask, but at the same time, they consider chicken to be vegetarian. 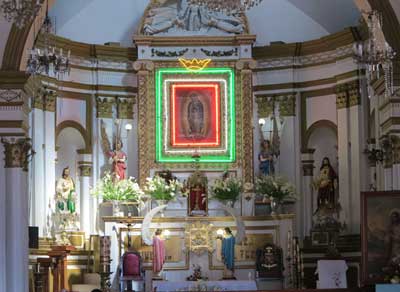 It was a long climb to reach the top of the Cerro de Guadalupe, but we made it. And the neon altar inside made it all worthwhile.

The streets were filled with hippies, both new and old. There were many people who seemed to be our own age (early 60s) playing musical instruments and sitting around at the many outdoor patios on the pedestrianized Real de Guadalupe. They looked pretty prosperous, if somewhat eccentric. The young hippies hung around the squares, often playing music or gazing aimlessly at the passing scenery.

There were a lot of bars on Guadalupe, many of them serving what I thought to be incredibly cheap beer. A litre and a half for 30 pesos seemed to be a popular price point, which would make it about a buck a pint here.

Just off the main action on a sidestreet was an English bookstore, where we bought new paperbacks for bus and plane reading. The owner had moved from Colorado less than a year ago. We talked briefly about how people dealt with the cold, since virtually all of the houses and flats are unheated. Electricity couldn’t be used because it was very expensive, she said. It wasn’t pleasant when it got cold. The owner of another restaurant said it periodically fell below freezing in winter, and people’s pipes regularly froze. 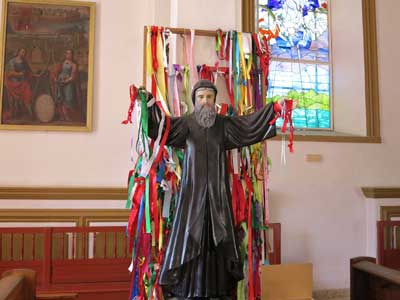 An example of the merging of religions: the ribbons, each of which carry individual prayers. are a badge of religious authority in traditional Maya culture in the region. Here, Jesus gets the ribbons.

One day, as we walked down the street, it looked like someone was getting a ticket for illegally parking his motorcycle. There was one municipal cop issuing the ticket, while another few of them looked on. Around them was a bodyguard of half a dozen or so state or federal police with machine guns. Everybody looked pretty bored and I couldn’t figure out whether this was a sign of a police state or a make-work program.

Another time, there was an army guard outside a bank. More short soldiers with very long rifles, pointed at the ground. A soldier wielded a large-calibre machine gun in the back of a war wagon-style pickup truck.

In neither case did they try to keep anyone out of their cordon; people were stopping to gawk, or, in the case of the army guard, to use the bank machines. If cops with machine guns can ever be considered non-threatening, I guess this was it. We just mentally wished everyone a nice day and kept walking.