A village of artisans preserves an ancient culture 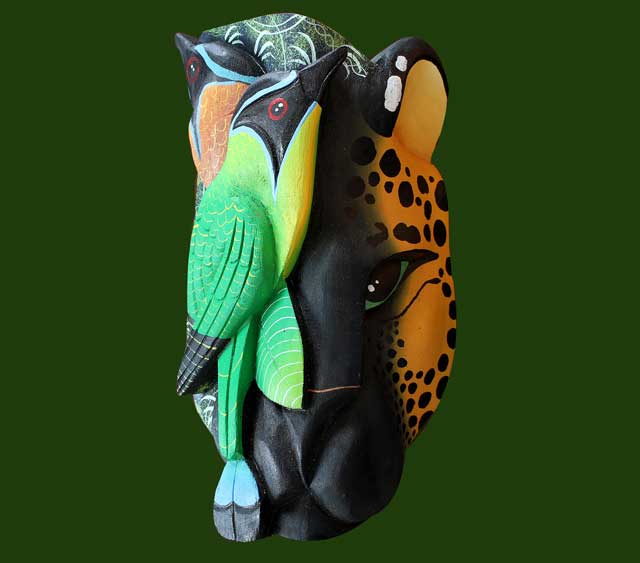 Jaguar and birds depicted in a Boruca mask by Ana Iris Elizondo Maroto.

A serendipitous meeting between Ana’s friend Lynn and an indigenous artist set the stage for perhaps our best day in Costa Rica, when Lynn and her husband took us to an entire village of artisans who make their living preserving their cultural heritage.

High in the Talamanca Mountains of southern Costa Rica, the village of Boruca is the centre of an indigenous tribe of the same name with about 2,000 members, located on a 140-square-kilometre reservation.

Lynn had met Ana Iris Elizondo Maroto when she was exhibiting traditional Boruca masks at a hotel near Ojochal, a small community on the southern Pacific coast of Costa Rica. The two exchanged contact information and Lynn promised to visit Ana in her village at some point. Our arrival gave her the reason she needed to organize an excursion. 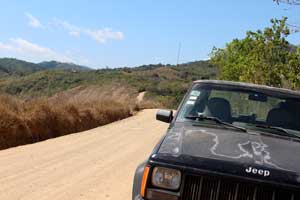 Photo-op time on the road to Boruca.

The roads around Ojochal were good, but that changed when we left the highway to climb to the village. The 8-km stretch was all dirt, with plenty of sharp turns and steep inclines as we headed higher into the mountains. The scenery was spectacular as the road climbed along the top of a ridge, giving us panoramic views of the mountains, forests and valleys around us.

We stopped at a small market on the edge of town, where an artisans’ co-operative sold their traditional masks and woven products, then it was on to the community museum while Lynn texted Ana to set up a meeting place. 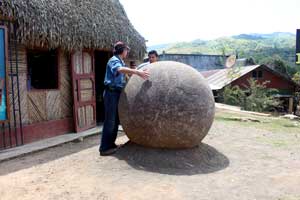 The community museum was set up with the help of the National Museum of Costa Rica in San José. It contains a number of informative displays, some artifacts and a huge, perfect stone sphere, an example of a cultural practice of the people that lived in the area before the Spanish came. No one really knows what role the spheres played in the traditional societies, but it’s thought they were used to mark the huts of important people in the villages.

Lynn and Ana arranged to meet at Ana’s house in the small, tidy village of about 400. Her collection of masks and carvings was astonishingly beautiful, and Ana (my wife) bought a jaguar mask at about a quarter of the price we had paid for a smaller carving at a souvenir shop in another part of the country.

The two Anas got along famously as they chatted about the challenges of their particular artforms. One shared experience was in the materials they used: both paint with acrylics. But where my wife’s medium is canvas, Ana Elizondo Maroto works with balsa wood. 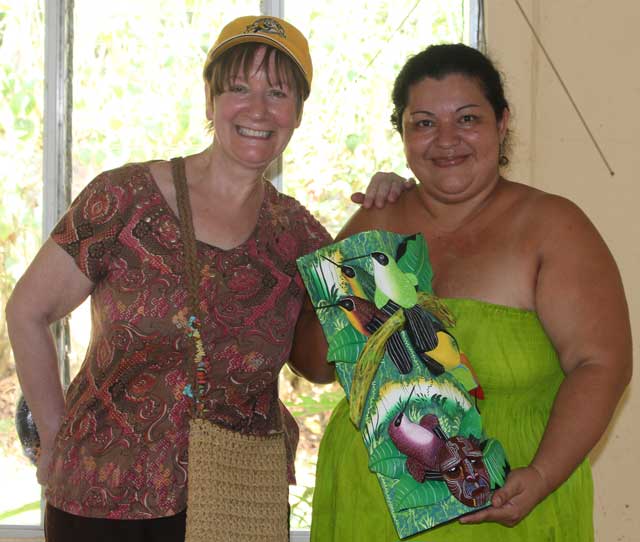 The two Anas smile for the camera in the village of Boruca. 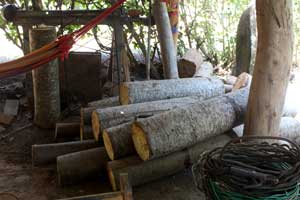 A pile of balsa logs awaits the artist’s attention.

Logs of balsa wood, thicker than my leg, are her raw material. Friends and family members make sure she has a stack of them cut, trimmed and ready to use. Using various tools in her studio, she shapes the masks and carvings.

Ana’s English was about as good as my Spanish, but we managed to have a conversation about her work. She said it takes her about 20 hours to make an average-sized mask or carving. The largest of her masks were designed for use in the annual Biale de los Diablitos (festival of the little devils), where villagers don devil masks, then visit with their neighbours and harass a man in a bull mask, who represents the Spanish.

Jaguar masks are also very popular. Boruca legends maintain that the jaguar is the protector of the village. The legends say the village shamans can change into jaguars to keep the villagers safe.

When I asked Ana how many of the 400 people in the village were artisans, she answered “all of them.” 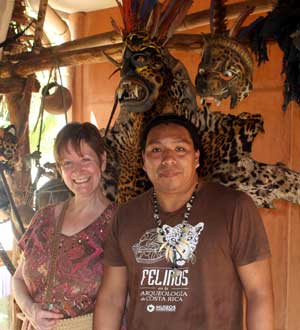 Ana (my wife) made another artist-to-artist connection when Ana (the mask carver) took us to meet her cousin, Melvin González Rojas, who signs his paintings as Kuradenk, his traditional Boruca name. Like Ana (my wife), Kuradenk paints in acrylics on canvas.

(On the way there, we walked past the house of her late grandparents. She noted that the house was the first in the village to have glass windows, which were brought in by a team of oxen pulling a cart up the dirt road we had travelled on earlier.)

As they chatted, Kuradenk asked Ana (my wife) if she’d like to wear his special necklace made with jaguar teeth. “I wear it when I paint,” he said, “because I feel the power of the jaguar.”

“I feel it too,” Ana exclaimed as he placed the necklace over her head. At that, Kuradenk brought over one of his jaguar masks and asked her to put it on. And then, because she proclaimed her belief in the power of the jaguar, he placed a jaguar pelt over her shoulders.

Ana was in her glory as she posed for photos, flanked by Ana Iris and Kuradenk. Only after we got home did I notice the small child peeking curiously around a corner at the spectacle. 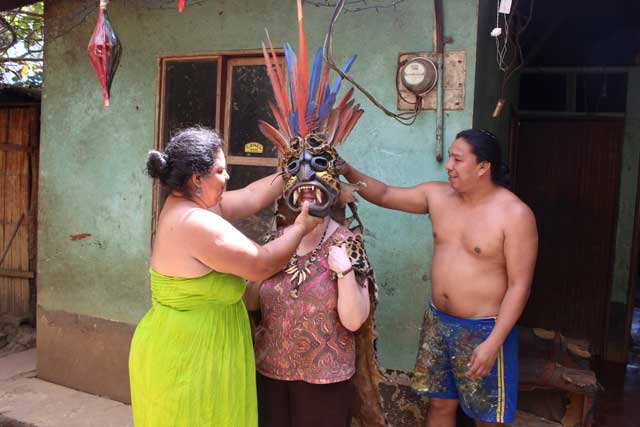 Ana gets fitted for her jaguar costume. 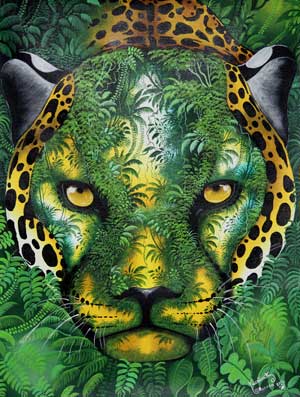 Finally, we bought a painting from Kuradenk, called “El Sol de la selva (The sun of the jungle),” that is the symbol of the 2016 Arts in the Southern Zone Festival, which will be held in August (see link above for more info).

But we were not done with the painter. The next day, when we went to tour an archeological site and its small museum, we watched an introductory video about the importance of Costa Rica’s indigenous traditions. There, in a scene of people walking with a museum official, was Kuradenk, wearing his jaguar-tooth necklace.

More information on the Borucas and Kuradenk:

Boruca behind the mask: http://www.boruca.org/en/