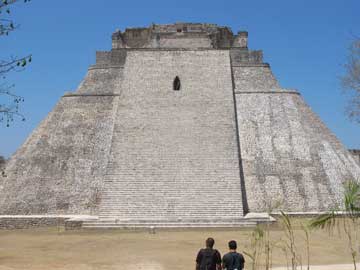 The huge Magician's Pyramid at Uxmal.

When I went for breakfast at 7am, I thought that perhaps the heat wave had broken. The morning was pleasantly cool, with a nice breeze. No such luck. By the time I went back to our room to get Ana at 8, it was once again stifling. It was only a taste of what was to come.

We were picked up at 9 to see two sites along the Ruta Puuc, Uxmal and Kabah. What more can I say about these ruined Mayan cities? Although very little of them has been uncovered and restored, they are both magnificent. Uxmal has the distinction of having a temple with rounded corners, the whole being built in somewhat of an oval shape. Kabah, of which only two buildings have been rescued from the jungle growth, has a huge temple covered in relief sculptures of Chaac, the god of rain and thunder. Both boasted stately courtyards around which were placed palaces and administration buildings. The proportions gave a pleasing sense of scale and reminded me of the main plaza in Salamanca, Spain, to my mind the loveliest public square in Europe.

The only problem was the heat. As Nelson, our guide, explained, April and May are the hottest months in the Yucatan. To call it hot today would have been a great understatement. Nelson estimated the temperature to be 38. On the hard-packed ground of Uxmal, with the glare reflecting off the hardpan grass, it must have been at least 50. We’ve never experienced heat like it. We took things very slowly, and resisted the temptation to climb to the top of the highest structures. A friendly couple from Paris agreed to take our camera to climb atop the “governor’s palace” building in Uxmal to take some fantastic panoramic views. Even without the exertion, both of our faces were red by the time we finished our two hours in Uxmal, and we had to duck into an air-conditioned store in the visitors’ centre to cool off. Despite slathering myself with SPF-110 sunscreen, I got a tan.

The next stop was Kabah, another extensive city which had hardly been excavated. All that has been partially restored is a huge temple honouring Cha’ac and a quadrangle around which administrative buildings were placed.

Nelson seemed to love his work. He told the dozen or so of us on the tour that he had been leading groups to Uxmal and the Ruta Puuc for 45 years. He was diabetic and seemed to be in his mid-60s. But I wondered about the state of life in Mexico that someone like Nelson, with his health challenges, still had to work at his age. (Of course, the same thing is happening in Canada, but that’s the subject of another rant.)

On our return to Merida, we rested for a couple of hours in our wonderfully air-conditioned room and then headed out for dinner. We chose La Casa de Frida, recommended by the guide books as a place for great vegetarian cuisine. The restaurant lived up to its billing and more. We started off with an order of Insalata Trotsky; with a name like that, who could resist? Trotsky had been one of Frida Kahlo’s many lovers during his ill-fated exile in Mexico. Perhaps that, and the shredded red beets in the centre of the salad, was the inspiration for the name. I tried to get a rise out of our friendly waiter by asking him why the salad was named for Trotsky, but he didn’t know. It seems political indoctrination is not part of the job training at this restaurant.

As we sat in the wonderful open-air courtyard, a beautiful cooling breeze sprang up and made the stinking heat of the day a memory. As I cooled down, I had an “Aha!” moment. The colours of the restaurant, reddish brown, a deep azure blue and turquoise trim, were derivatives of the colours used by the Mayans.

Ana had what was described as a corn-fungus quesadilla. She couldn’t figure out what type of fungus it was, but said it was delicious. I had chicken in a creamy chilli sauce which had a subtle peppery heat and, unlike much of the food we’ve eaten here, was not salty. With salad, entrées and drinks, the total came to just over $50, including tip.

We’ve both taken to the spices and fiery peppers they use in their cooking. In fact, at lunch, they put out bowls of salsa on the table and warned us it was very spicy. It was. But Ana mixed virtually the entire bowl with her lunch, leaving me a couple of teaspoons to spice up the very mediocre spaghetti I had at the Uxmal Maya Resort. (By the way, if you have a chance to stay at this place, don’t.) No one else touched their salsa.

Another incidence of the practical Mexican approach to life manifested itself as we walked back to our hotel from the restaurant. We eschewed desert in order to grab an ice-cream bar for Ana and a beer for me at the Oxxo store (somewhat like a 7-11) on Calle 61 on the way back. A 1.2-litre bottle of Cerveza Superior Rubia was calling to me as I scanned the beer fridge. For 23.50 pesos ($2.35), how could I resist? But the beer didn’t have a twist-off cap and we had no opener in our room, so I asked the clerk if he would sell me one. He didn’t have any in stock, but he offered to open the beer for me. I said I didn’t want to walk around with an open beer, which is supposedly against the law here. Undaunted, he opened the bottle, then punched the cap down on top of the neck and put it in a bag for me.

It reminded of an incident I saw the day before on the same block. A minibus made a sudden turn into its garage across two lanes of traffic. The driver of a truck behind the bus had to slam on his brakes to avoid an accident. In Toronto, this would have resulted in curses and aggressive posturing. Here, the truck driver and his passenger had a hearty laugh, and drove on with big smiles on their faces.

The longer we stay here, the more I like this place.