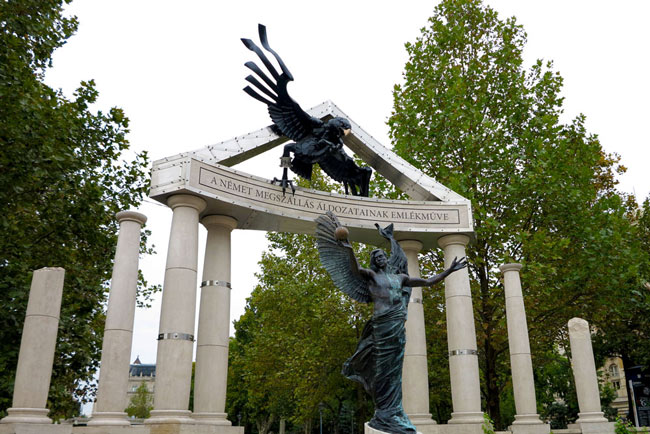 The official memorial to vicitims of the Nazi occupation, decried by critics.

Budapest’s Szabadság (Liberty) Square is a strange kind of place. It’s a beautiful park spanning several city blocks, surrounded by massive 19th- and early 20th-century buildings that seem to brood over the treed pathways and statues. Ana and I stumbled on it during our walk from the Hungarian Parliament to St. Stephen’s Cathedral.

But once again, the Second World War casts a long shadow. At the entrance to the square stands a controversial war memorial, erected in the middle of the night by Hungary’s neo-fascist government, to “all the victims” of Hungary’s German occupation in World War II.

Critics of the monument include opposition political parties and the Jewish Federation in Hungary (Mazsihisz) and, as they see it, the monument papers over Hungary’s complicity in the deaths of nearly 500,000 people at the hands of the Nazis, most of them Jewish. They mounted protests after its completion in 2014, with one political leader accusing the government of “falsifying the Holocaust” and “confusing the murderer and the victim.”

On one side of a narrow street stands the monument. On the other, affixed to the bollards and barb-ed-wire chains along the roadway, is a different kind of monument: a collection of photos and messages, momentos, candles and stones to remember the innocent civilians who were killed by the Nazis. 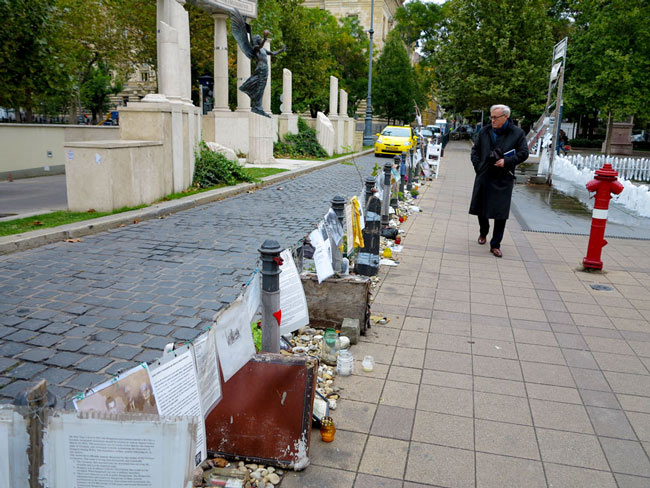 A pedestrian examens the personal effects and documents that make up the Living Memorial.

Also affixed to the chains was an unsigned manifesto that reads as follows:

“On the New Year’s Eve (!) 2013 the Hungarian government passed a law that a German occupation monument should be erected on Liberty Square before March 19, 2014. This monument was to consist of two figures: the imperial eagle of Germany and Archangel Gabriel, symbolizing the innocence of Hungary during WW2. This launched a civilian protest still going on in this square.

“This memorial is officially named: Memorial for the victims of the German occupation. This name is wrong both historically and artistically.

“1. The Germany that marched into our homeland was carrying the swastika and not the imperial eagle.

“2. Hungary was in alliance with the Third Reich, thus could not be occupied. What happened was only a military occupation. 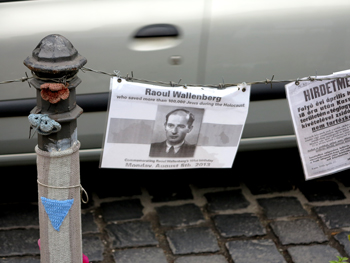 A poster commemorates the 101st birthday of Raoul Wallenberg, who saved 100,000 lives during the holocaust.

“3. There were innocent as well as guilty Hungarians. The Hungarian administration and numerous Hungarian civilians actively participated in the denunciation, deportation and occasionally the massacre of 470,000 Jewish, 15,000 gypsy and several thousands of homosexual Hungarians.

“4. Quite a few renowned sculptors have stated that this piece of work does not even meet the basic artistic requirements of a memorial.

“The first step of the protest was to show up a real memorial, in contrast with this phony monument to reveal the fact that it is consistently falsifying our history. This is why survivors, their descendants and sympathizing citizens have brought here their personal objects, pebbles, photos, documents, candles as a Living Memorial of Remembrance.

“For over 1 year, every afternoon between 17:30 and 18:30 we have been protesting with live chains, speeches and songs. From 18:30 until 20:00 there is a Living Memorial discussion here, with the motto: Let us make the living memorial of Hungarians from ourselves and our discussion. As a result, and disregarding its own laws, on the night of Sunday, July 20 a group of construction workers escorted by the militia secretly sneaked in the square and in a thieving manner, placed the “statues” on top of the pillars.

“There has not been an official opening ceremony yet!”