Assorted thoughts on our trip to central Europe

Tourism without guidebooks; trains, cabs and the Boeing 787. 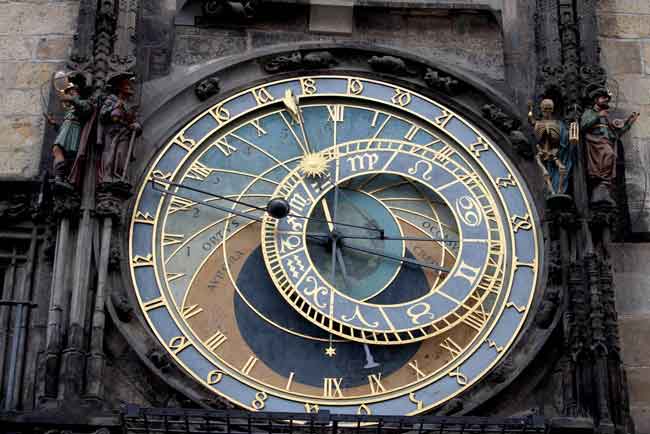 Prague’s astrological clock. I love all things medieval, and there was a fair bit of it on our trip.

We had planned a longer trip to Russia, Poland, the Czech Republic and Austria a couple of years ago, but health issues forced us to cancel it. So in October 2016, we decided to take a somewhat shorter voyage through Central Europe, using Copenhagen as our European entry point because (a) it would allow us to fly on a Boeing 787 Dreamliner and (b) Copenhagen seemed to be a cool place to visit and we hadn’t been before.

We lucked out on our weather – in a bad way. But there were plenty of indoor activities to make the trip worthwhile.

As for the 787, I will try and take this airplane whenever I can. Flying at a cruising altitude of 42,000 feet (between 7,000 and 12,000 feet higher than the routes other planes take), the ride was beautifully smooth and quick.

It’s true what they say about the reduced jetlag, too. The cabin had excellent ventilation and I understand the oxygen mix is much richer than on other aircraft. The windows are also a lot bigger and use static electricity to dim or admit the light outside.

I’ve never had a washroom experience like I did on the 787: the mid-cabin facility has a large window and you could look out on the wings, which bend upwards when the plane reaches its cruising altitude and speed, shining in the rising sun. Far below, the clouds reflected the early morning light. 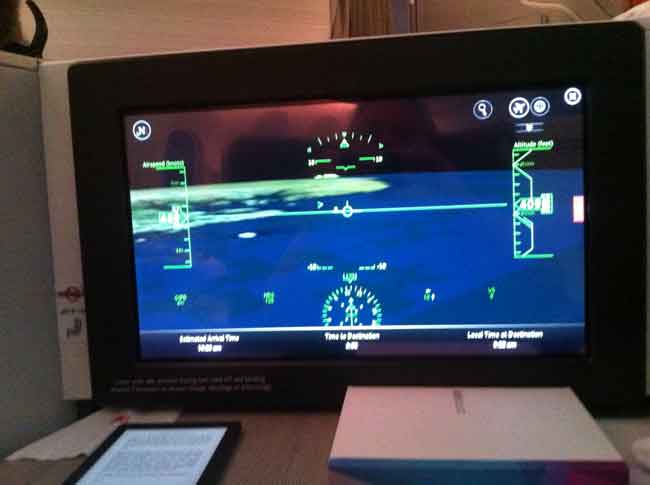 Even on a blurry photo taken with my phone, the 787 status display looks pretty cool. Here, we’re at 40,900 feet in heading 129, having just started out descent into Copenhagen.

My favourite amusement on board was watching the cockpit simulation, with readouts of attitude and altitude, compass heading and airspeed. You could choose a “view,” thanks to Google Earth or something similar, from the front or side windows. If only you could try and fly the thing from your seat for a few minutes. Or maybe not.

Trying to reduce the weight and volume of our luggage, I suggested that we take a five-city tour of Europe without guidebooks. Why spend money on guidebooks when the information is freely available on the web or on mobile apps? Why take a physical book when e-readers are cheap and can hold thousands of volumes? Who needs to cart around the weight of two or three clay bricks?

Our experiment, haphazard though it may have been, was a real eye-opener, not only on the utility of printed documents, but also on the design of information in the electronic media. I’ve come to the conclusion that when travelling, it takes longer to find information without a book or other printed documents and that the information you do find is presented in a worm’s-eye view that does not give you a strategic picture of the place you are visiting.

Looking at the media itself is a place to start. Before the trip, I bought a new e-reader, the Kobo Aqua One, at a cost of about $250 Canadian. I also invested in electronic editions of travel guides for the places we were visiting, some of which were developed specifically for mobile devices.

While the guides themselves were useful to read before we arrived at our destinations, I missed having the ability to quickly access a table of contents and quickly flip through a chapter or section to get the information I needed. Ebooks simply cannot provide this type of experience.

It’s not very easy to quickly scan a number of pages in an ebook. My Kobo reader can be slow, taking as much as several seconds to advance the page. Sometimes, it does not seem to register my tap or swipe, leaving me to try again in frustration and be equally frustrated when the device then comes back to life and advances two or three pages instead of one. At other times, I simply cannot use the menus or keyboard; the ereader’s processor is just too slow, it seems, and hangs whenever I ask it do more than the bare minimum. 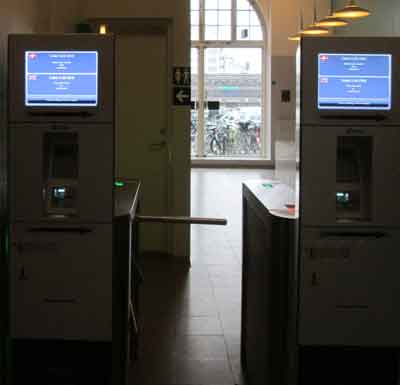 Then there is the quality of graphics in ebooks. “Atrocious” is too kind a description. Web graphics are usually shown at 72 pixels per inch; I would be surprised if the resolution on the ebook graphics, whether read on my Kobo ereader or on my notebook computer, was half of that. Some books gave you the option of clicking on a graphic to enlarge it, but then the already poor resolution is reduced by half, which makes it impossible to read street names and other labels. Some of the maps enlarged in this way took more than one page to display, making for a clumsy process of advancing pages and then returning, rather than being able to see both pages at once.

Websites are better, but they are often poorly designed and are prone to bugs. We tried to explore the various districts of Copenhagen on our arrival via an official tourist website. Some of the maps did not work at all, making them useless. Others would not expand. Copenhagen’s transit website doesn’t give you an understandable system map; rather, it lets you type in your origin and destination, then comes up with a route that takes an hour and a half to go a mile or two.

In any event, it would be awkward to take a laptop or a tablet along and connect with the internet while you are trying to find a destination. Granted, Google Maps works excellently on a phone if you get lost and it has rescued us a number of times on both sides of the Atlantic. But I don’t find a phone to be a good way to learn how to navigate a city; again, you get the worm’s eye view on a tiny screen. 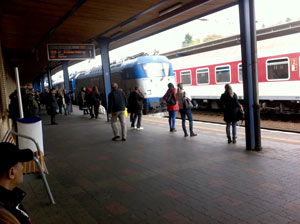 They looked old and well used, but the EC-class trains in central Europe were comfortable and fast.

The European trains we took were great. The EC (Eurocity)-class trains provide extra luggage space and a consistent experience across the systems of several countries. The equipment was often older and looked beaten up on the outside. But the interiors had all been refurbished to the same standards and layouts. They were comfortable, clean, fast and, for the most part, on time.

Interestingly, because of the seat-reclining debate on the airlines, I found them no less comfortable because these seats did not recline, even on a scheduled eight-hour ride. Of course, there was considerably more hip and leg room than on an aircraft, which may have made the difference. 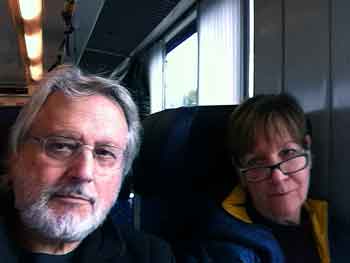 The short stops took a bit of getting used to. Our train from Budapest to Vienna, for example, travelled all the way through to Munich. In Vienna, this meant a stop of about two minutes and we had to devise a system of moving our too-copious luggage on and off the trains. But by our third trip, we had the hang of it. Next time we’re travelling around by train, however, we won’t bring so much.

Another eye-opener about rail travel was the price. A Eurail pass for our trip would have cost about $800 for the two of us. Buying the tickets at the station cost us $300. I’m not saying it would always be cheaper to buy unreserved tickets at the station. In Japan years ago, our JR pass saved us a fortune. But it pays to do some research before leaving home; in this case, it saved us a few hundred bucks.

Overall, it was a memorable trip, if a bit too crowded at the tourist sites. Would we do it again? Probably, but with a less ambitious itinerary. We thought we were doing well by staying at every place (except Bratislava) for four nights, which is a lot longer than we usually stay in a city.

The only places we got ripped off were in taxis. In Bratislava, the driver to our hotel overcharged us by about 10 euros, just because he could. In Budapest, you have to be very careful with the cabs; many of the drivers will cheat you blind. On the other hand, the drivers in Prague, contrary to tales I’ve heard, were professional and went by the meter. Same in Vienna and Copenhagen.

We took two internal flights in Europe, from Copenhagen to Prague on Scandinavian, and from Vienna to Copenhagen on Austrian. They made flying within North America look good. It looked like a classic case of consolidation in the industry, with the established flag carriers stuck with outdated equipment that badly needed freshening up. The upstarts like Air Berlin (owned, our cab driver told us, by former Austrian racer Niki Lauda) and German Wings (flying again after the pilot-suicide crash) were challenging them. Lufthansa seems to be working both sides of the street, with ownership of both Austrian and German Wings, probably among others.

Next year, I turn 65 and can get only limited travel insurance. Unless I can find alternative insurance, our trips will become one-city stays lasting no more than a week – which will still be fun!