How not to have fun in Budapest 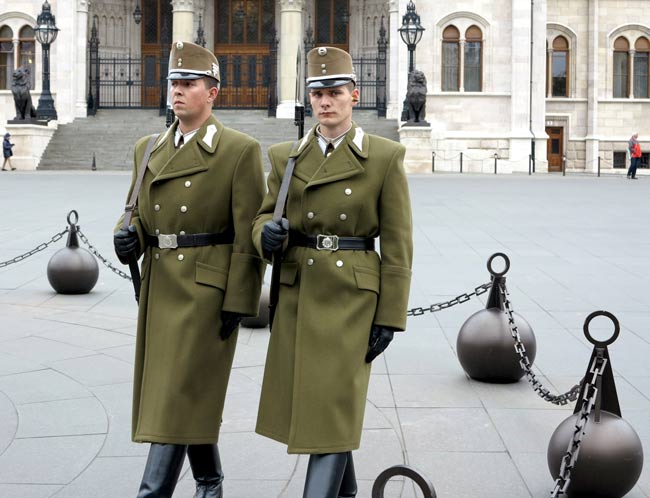 Always a friendly smile for the tourists at the Parliament building in Budapest.

It all started the minute we arrived in Budapest. The train disgorged us into Keleti station. There were no information booths and very poor signage. A sign seemed to point to an underground area for taxis. I could see out the station’s front door that it was built on a hill, so it seemed logical that there might be a taxi stand down there. Nope. Then someone gave us bad directions, or perhaps we didn’t understand each other.

Half an hour later, we finally did find the taxi stand after schlepping our heavy bags back up the stairs, to be told by the driver that the fare to our hotel was going to be 6,500 Hungarian Forints. It occurred to me as we drove that the fare may have been wrong since even I could figure out, based on the rate printed on a sticker on the window, that 6,500 Forints would get us a lot farther than the few kilometres to our hotel. I asked for a receipt when I paid the fare and the driver refused. I told him it said right in his cab that it was the law he had to give me a receipt. In response, he handed me back 1,000 Forints and drove off.

When we went to check in to our hotel, there had been a mixup with our reservation and would we mind going next door? Sure, why not, we thought. And the hotel was indeed friendly and modern. Only problem was, our room was about the size of a large closet.

Dinner that night was an excellent Thai meal. But the restaurant tried to charge us for an appetizer we didn’t have. Oh well, I thought, I did enjoy the food and the beer.

The next day was cold and rainy. We decided to buy tickets for the hop-on hop-off tourist bus. The bus became crammed with families with huge suitcases heading for the train station, which was near one of its stops. The windows fogged up and the bus didn’t actually pass a lot of the attractions (“Just a block or two from here is the…”).

After a couple of hours in the National Gallery (a superb gallery in a former royal palace), we took the bus to the Parliament building. The Gothic architecture features a uniquely Eastern flavour that makes the building quite striking. But the militaristic statues around the building, the guards with machine guns who wouldn’t let us get too close and the two soldiers who half goose-stepped around the flag creeped me out a little.

We missed the tourist bus and decided to walk back to our hotel, passing through some neighbourhoods and trying to find a couple of the sights. Budapest is considered a city with a good quality of life at a good price, and we could see how that would be true. There were pedestrian shopping areas and lots of reasonably priced restaurants and bars. There was beautiful architecture and plenty of parks.

But I started to note that the architecture, while imposing, was also designed to intimidate at street level. Everywhere, it proclaimed the might and glory of empires of the past. The wars against the Turks were still being fought in the National Gallery and militaristic statues seemed to pop up everywhere. 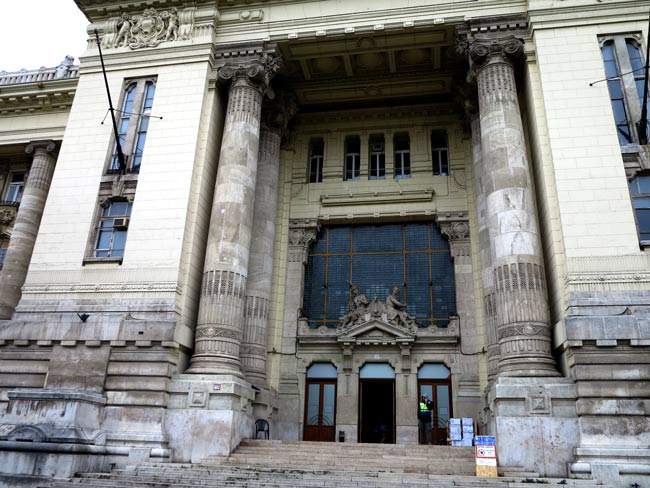 A lot of Budapest’s architecture seemed designed to intimidate and impress.

We also noticed that a lot of the imposing 18th- and 19th-century buildings looked either wholly or partially empty. There might be a restaurant and a few stores at street level, but the upper floors looked unoccupied to us. Judging from the condition of some of the window frames we saw, it seemed some had been empty for a time. But there was some rebuilding going on, as we discovered on our walk.

And we thought about the areas we had seen from the train on our way into the city. People were hanging around right on the edge of the tracks. Rows of housing backed up against the railway right-of-way, separated from the tracks by an above-ground, graffiti bedecked pipeline of some kind. Between the neighbourhoods, people were camped in the patches of woods.

We did meet some nice people in Budapest: the folks at our hotel, the sympathetic cab driver who took us to the station on the way out of town. But others were brusque to the point of rudeness. I wondered if that was because we came at the end of a long tourist season, or perhaps people were under a lot of pressure in the city.

We were only in Budapest for a couple of nights and we decided to get up in the morning, spend half a day sightseeing and then catch the 11:30 train to Vienna. But fate intervened that night in the shape of the Restaurant Fatál. It fit its English description. Ana had a mushroom goulash that did not agree with her at all, and woke up feeling nauseous. She decided to sleep in while I went for breakfast and settled up with the hotel. Then we packed up and got a cab to catch an earlier train. The train is quite comfortable, and Ana figured she could sleep or at least rest the whole way. 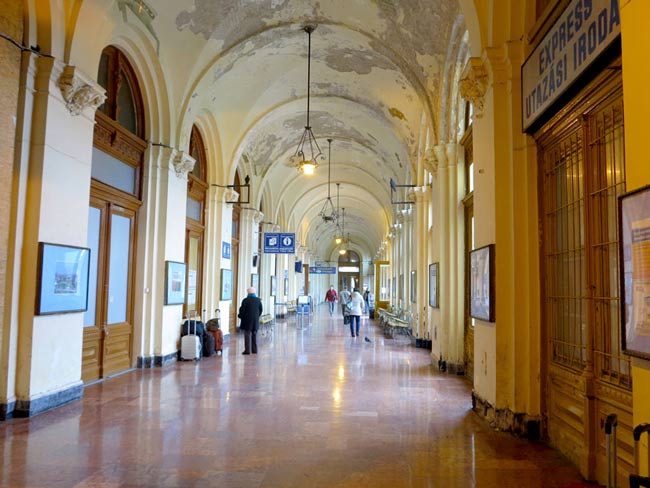 A cold, drafty corridor in Budapest’s crumbling Keleti station, where we shivered during a two-hour delay.

Of course, we had to pick the train that was delayed for two hours. So we sat in crumbling, unheated Keleti station, where Ana huddled into her winter jacket and tried to fight off the chills and the damp. (Did I mention that it was cold and rainy during our stay?)

When our train finally pulled in, we sneaked aboard while it was still on its arrival platform, along with some young people who were travelling Europe and clearly experienced with this tactic. Since there were very few who did this, we got our pick of seats and made ourselves comfortable. The train shunted between platforms before the rest of the passengers boarded. After a smooth, quiet four-hour trip, Ana felt much better by the time we arrived in Vienna.