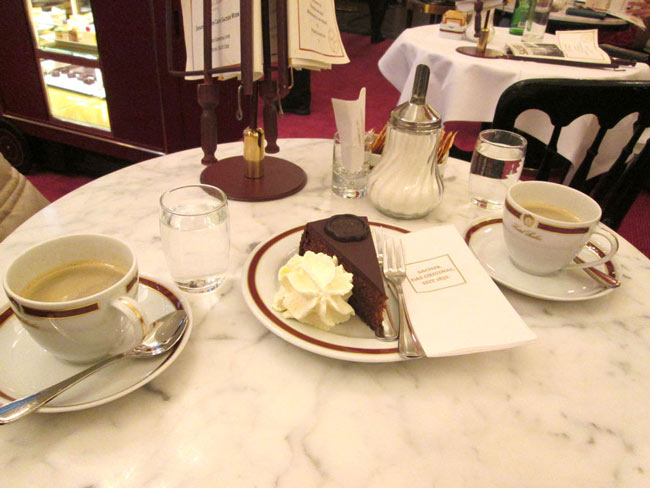 Our 20-euro snack at the Sacher Café. Why didn’t we steal one of these cup sets? 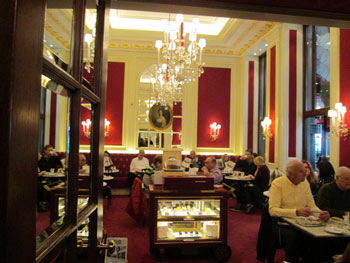 The café was cozy, the lighting was warm, the chandeliers were bright and the day outside was cloudy and cool.

You can’t go to Vienna and miss out on a slice of the world’s most famous chocolate cake, especially when the price includes a living museum exhibit.

Wandering around on the way to the tourist information office near the Opera, we bumped into the Hotel Sacher, ancestral home of the Sacher Torte. OK, I hadn’t heard about it either until I watched an Anthony LeBourdain show about Vienna, and it wasn’t exactly on our list of must-sees. But although there was a lineup to the famous Sacher Café, it was a short one and, as it was cold, we looked forward to a coffee.

We got a slice of upper-class Viennese history along with our cake. At the Café Sacher, it feels like you could be observing genteel society in the 1800s. Our server was surprisingly friendly; surprising to us, at least, partly because of the patina of Old Vienna that pervaded the place and partly because we were obviously tourists, gauche enough to take photos while we waited for our 20-euro slice of cake and two small coffees.

The original Sacher Torte was born in 1832, when an apprentice cook, filling in for his sick chef, had to come up with a dessert that would appeal to Prince Metternich and some high-ranking guests. Today, the café boasts that it’s still made by following “the exact sequence of the 34 individual steps right up to the packing of the cake in exclusive wooden boxes that are crucial for the success of an Original Sacher Torte.”

Evidently, the Sacher Torte is much imitated but never duplicated. We did see cakes at other restaurants that purported to be Sacher Torte but didn’t feature the distinctive Sacher medallion.

I thought the cake was delicious and unique. It had a blend of chocolate and something a bit sour that was unlike anything I’ve ever tasted before. I quite enjoyed it but Ana wasn’t so impressed; she thought there was vinegar in it to give it its hint of sourness. 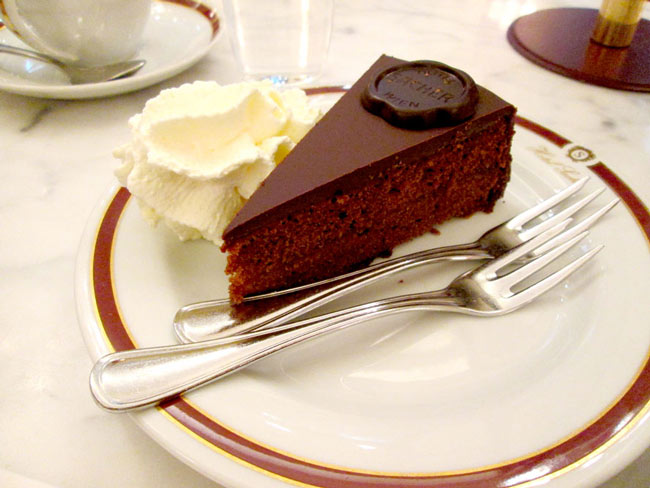 This is what it’s all about. Just thinking about it makes my teeth hurt.