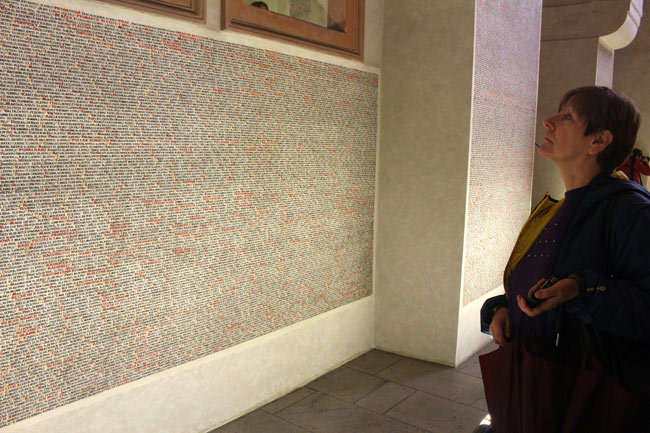 Ana contemplates a wall in one of Prague’s Jewish museums that lists the roughly 75,000 Nazi concentration-camp victims who lost their lives in World War II.

The rather striking thought occurred to me in Prague that the repressive Russian occupation that was supposed to liberate Czechs after the war is remembered more strongly than the horrors of the Nazi regime that preceded it. While the human-rights abuses that took place under the Russians were legion, they surely don’t hold a candle to the horrors inflicted on the population by the Nazis.

Photos and lists of the horrors perpetrated on the Jewish population by the Nazis somehow can’t match the power of this simple list of names. One of the things that comes close, though, is the exhibit of drawings by the children of the ghetto the Jews were forced into. Like children’s drawings everywhere, they show the joys of daily life: of play in the sunshine and family holidays. But the unspeakable horror of the Nazi occupation is also stamped into their consciousness: there are drawings of threatening German soldiers and guards and of the trains that took them away to their final destinations. (The exhibit was so crowded when we saw it that is was impossible to get photos of the drawings.)

But the Jewish Museum is about more than the holocaust. It traces Jewish history in Czechoslovakia from the middle ages to the present, outlining their roles as craftspeople and the country’s earliest financiers. Like in the rest of Europe, the Jews were persecuted when it suited the rulers to repudiate their debts, and welcomed back when their financial craft was needed again. But Jews were also skilled craftspeople. For example, they were among the earliest printers. Their sculpture, metalwork, weaving and graphic art throughout the years is also on display.

I find their old synagogues to be simple affairs, missing all of the allegorical sculptures, paintings and threats of their Christian equivalents. While that can make old synagogues rather boring to visit, they’re often places of pleasing proportions and surprising light, like the one we visited in Prague’s old Jewish quarter. 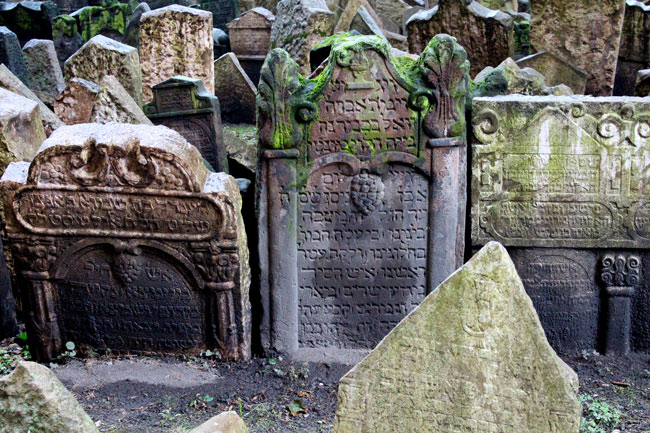 As many as 100,000 people lie in the old Jewish cemetery of Prague.

The old Jewish cemetery is also worth a visit. The Jews used the cemetery from the mid-1400s until 1787, when the last known burial took place. Estimates of the number of people buried here range from 12,000 to 100,000. There are as many as 12 layers of graves, and headstones may commemorate people buried several layers down. We visited on a day made dark with misty rain, a perfect time to visit a graveyard!

The Jewish quarter itself looks almost exactly the same as the rest of Prague’s old town, which is to say there is very little in the district that could be called distinctly Jewish in character, save for the old synagogues and small glimpses down cobblestone alleyways that evoke another millennium.