San José: the diamonds among the grit 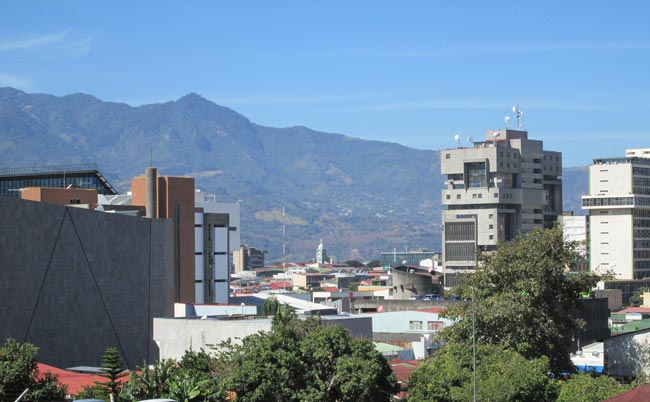 Nestled in a valley, San José is a bustling, if gritty place.

San José, the capital of Costa Rica, left us with the impression of a gritty, unhappy place. We felt we owed it to ourselves to stay for a day or two; it is the capital city, after all, and a million people live there. But if we visit again, we’ll probably stay near the airport if we have to stay overnight.

For me, the highlight of our stay was the Museo Nacional de Costa Rica, a modest but excellent effort to portray life in Costa Rica from prehistory to the present. This it did in a series of rooms whose subjects ranged from dinosaur bones to colonial life. The building is housed in a former mansion turned fort, an echo of a more violent time. Its entrance on the Plaza de la Democracia is a fanciful glass play on the spheres the indigenous people made a thousand years ago.

The one-room Museo del Banco Nacional was surprisingly fascinating. It told the country’s history through its coinage and, later, paper money. The early paper money in particular, some of it issued by private banks and companies, featured detailed engravings of economic activity. Agriculture and railways were common themes, mirroring the foundations of the colonial economy.

The Museo del Jade is not only about jade, although the building was designed in the shape of a giant block of natural jade. Along with a large collection of jade artifacts, it houses historical displays of pre-Columbian life and culture. The collection is so big that there’s an entire room of it on the top floor that hasn’t been entered into the electronic catalogue (that doesn’t really work anyway). It’s much more thorough than the archeological museum under the Plaza de la Cultura.

The Museo de Arte y Diseño Contemporáneo was a disappointment. We figured we’d see this, rather than the Galeria Nacional, because it was much closer to our hotel and the other museums. This one was housed in an historical building, a former distillery. There looked to be only three large rooms, one of which was closed off for installation of the next exhibition. It seemed to be mostly video installations; we’re not fans. Luckily, we came on free day and didn’t have to pay the roughly $10 admission charge.

The Parque Nacional across the corner was an oasis of shade and rest on both occasions we happened to come across it.

The pedestrian mall that marked the centre of the historical district was right beside our hotel, so we spent a few hours walking the streets. San José has its fair share of beautiful Spanish colonial buildings, some of the best of which are still theatres. It also has some impressive architectural efforts from (I think) the ‘50s or ‘60s, including a movie theatre and several corporate buildings.

One of the main anchors of the pedestrian zone is a department store called “Carrion.” At first, I thought the word meant something else in Spanish, but nope, it has the same meaning as it does in English. Perhaps it’s a family owned place and that’s their name. Whatever the case, it was worth a chuckle.

Another anomaly was the Plaza de las Garantias Sociales, where a bronze statue of a street sweeper complemented a larger figure dedicated to the workers who built the country. Costa Rica has gone through several abrupt political shifts since the mid 1800s, but it retains some core programs (like the national healthcare and education systems) and values from its more revolutionary days. It was nice to see a counterbalance to the military statues.

We missed a few of the sites, like the Catedral Metropolitana and the Galeria Nacional. We didn’t bother going to the Barrio Chino and we didn’t go to one of the many theatres in town. In fact, we were pretty much tuckered out at the end of our trip.

We stayed at the Hotel Presidente, a hipsterized establishment that strives to be a boutique hotel but is just a bit too big to pull it off.

The lobby features an eclectic collection of typewriters and lamps made from old industrial parts. The washrooms are marked by neon lighting; I walked into the men’s thinking it was a bar.

But it was a nice place to stay. The staff were quite friendly, spoke English and would even put up with my Spanish. The rooms were clean and the beds comfortable. The breakfasts, included in the price of the room, were excellent. And the price was pretty good in a city of a million – around C$150 per night.

We stayed there twice, once at the start of our trip with time only for a sleep and breakfast and again for two nights at the end. On our second stay, they upgraded us to a deluxe room. It was huge and had a sitting area where I sat and drank beer on our last night in the country.

We arrived in late afternoon, so only had time to get our bearings on the first night. But I witnessed a miracle – the pouring of draft beer in the restaurant of the Hotel Balmoral, across the pedestrian mall. We had supper there on both nights of our second stay.

As soon as the sun went down, we felt the atmosphere of the pedestrian mall change dramatically. Metal curtains slammed down in the shopfronts. The mall became quickly deserted. Shady characters lounged in shadowy doorways. The beggars came out, reminding me of Toronto! It was not a place we wanted to be; we went back to the hotel on both nights right after supper.