The tragedy of Christiania 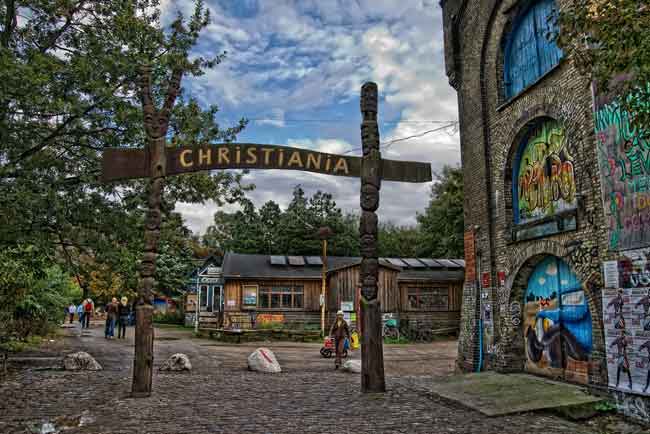 Thanks to Messy Nessy Chic for this photo, which I grabbed off the web. Signs around Christiania warned people not to use their cameras.

It was supposed to be an enclave within the city of Copenhagen where people believed in all of the good stuff that was promoted by the counterculture of the 1960s, including freely available marijuana. But today in Christiania, construction debris litters weed-choked green spaces, residents have iron security fences and cameras, public washrooms are neglected and filthy, and marijuana is still available, brought to you by biker gangs.

The community became a symbol when a journalist announced the founding of a free town on the old base, “a self-governing society whereby each and every individual holds themselves responsible over the wellbeing of the entire community,” according to its mission statement.

But the dream seems to have died amid periodic violence, including shootings and murder, and conflict with the civic authorities and biker gangs. The gangs moved in and took over the trade on the iconic Pusher Street. The city made a number of efforts to take control, finally resulting in an agreement that Christiania would become a part of Copenhagen in 2017.

For now, though, there are still signs of the old spirit. A sign still warns exiting visitors that they are re-entering the European Union. There are still a few art galleries and a café. The stalls around Pusher Street seemed to sell the same stuff you could buy in souvenir and clothing stores around town, except it was more expensive. A sign as you enter the enclave forbids violence and weapons.

We thought we’d visit an art gallery in one of the older buildings. The tiny foyer was painted flat black. The business on the ground floor was closed. The space, a stairwell, was lit by a 20-watt lightbulb. The walls were covered by graffiti. We’ve been in some pretty iffy places, but we decided not to climb this dark stairway.

We wandered along to the famous Pusher Street, where young men in bomber jackets lounged around outdoor tables, obvious sources of the freely available marijuana.

There were a lot of good hand-painted posters on the sides of the buildings, with sometimes funny, sometimes outraged messages about politics and society. But others were vaguely threatening, like the one on Pusher Street telling you humorously, but in no uncertain terms, not to use your camera.

We didn’t at any time feel threatened during our walk through Christiania. But it sure didn’t seem like a centre of counterculture any more. In fact, it was downright sad.