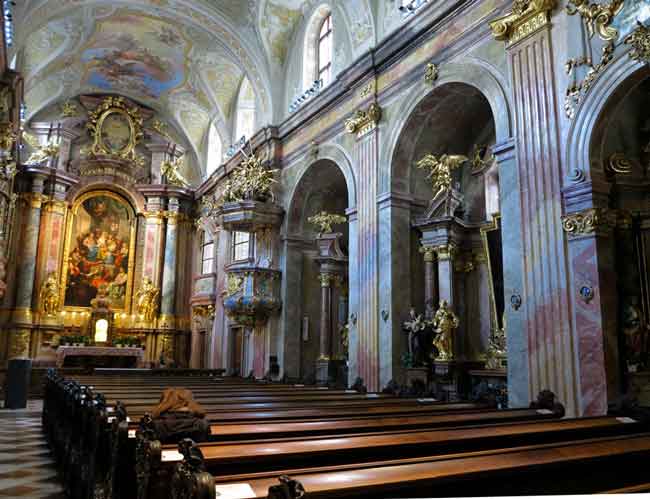 The interior of St. Anne’s church in Vienna, where we saw a Baroque string quartet demonstrate how much music is part of the city’s fabric.

Vienna seemed a breath of fresh air after the faintly oppressive atmosphere of Budapest. Even though the weather was about the same – overcast and on the cold side, except for the day we left – Vienna revealed itself as a city of light, where people talk to you on the street, avante-garde art is promoted, audiences clap in time to music and music is part of the city’s very fabric.

There was so much to see that we pretty well just hung around and checked out what we bumped into. Our hotel was right on the Ringstrasse, near the Opera, the Museum Quarter, the Hofburg Palace, Karlsplatz and the central pedestrian district. So other than making a point to visit some contemporary art galleries, we picked a direction and just walked.

Grandiose doesn’t begin to describe the palaces and public buildings in and around the Ringstrasse. I couldn’t help but wonder, as we wandered around somewhat slackjawed, how much of the country’s gross domestic product was devoted to building palaces for one branch or another of the Hapsburg family, which ruled Austria-Hungary for some 600 years. 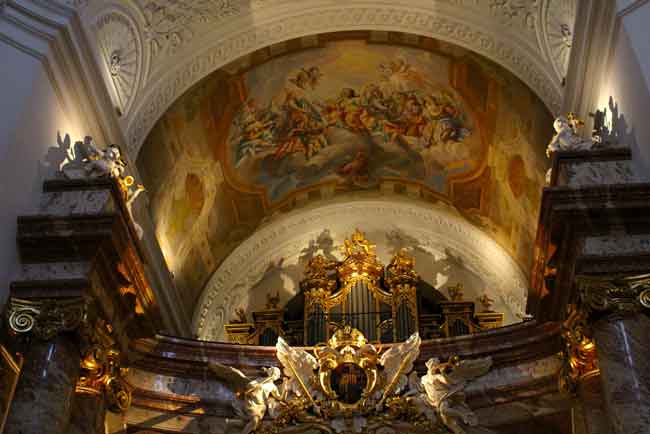 The organ loft of Vienna’s Karlskirche, just around the corner from our hotel. In central Vienna, you could just stroll around and bump into imperial magnificence.

The sense of awe was perhaps greatest in the Museum Quarter, where the Art and Natural History Museums, two former palaces, mirror each other across the broad Maria-Theresien Platz. Each of these buildings has probably hundreds of rooms, with stunning architectural features and works of art literally everywhere you look. Across the road, the Hofburg Palace complex competes for the pinnacle of excess.

What I’ll remember most about Vienna is the concert by a baroque quartet in St. Anne’s Church. The quartet played on period instruments; the lead violinist said his violin was almost 300 years old. The church, a small, serene structure from the 17th century, avoided, or at least preceded, the decadence that followed.

And decadence is really the only possible description for what was going on in the Hapsburg empire in the 50 or so years before World War I. The concert we saw in the Kursalon Wien was all about silly frippery: fancy horses, dashing cavalry officers, grand balls and music that for all its smooth melody and harmonious arrangement was really meant as mindless entertainment.

Even our hotel, paid for with a fortune in Aeroplan points, was a former palace of an Austrian prince, someone’s cousin or brother-in-law who needed a house in the city with a hundred or so rooms in which to entertain and recover from entertainment. 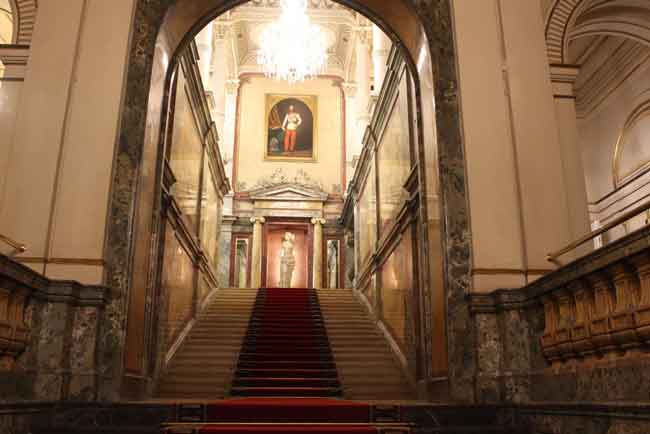 This staircase was not the entrance to a palace, but the way to the mezzanine of the Hotel Imperial, where we stayed.

We saw several contemporary art galleries: the Albertina, the Mumok (Museum moderner Kunst Stiftung Ludwig Wien), the Leopold Museum and the Kunstahalle Wien. The greatest irony was the exhibition on art in the age of social media, which talked about the sharing of artistic vision. But guards were assiduously on the lookout to prevent you from taking any pictures. The Mumok building itself was of interest: a dark slab arising from a courtyard that featured buildings from Vienna’s classical era.

My turn to be sick

Vienna also featured my turn to be sick. Our usual practice was to buy our supper from an upscale market near the hotel and bring it back to our hotel. On the night we saw our Kursalon concert, my main course was a tuna sandwich. Soon after we got back to our hotel after the concert, my stomach started feeling weird. Then followed an entire night of real discomfort. 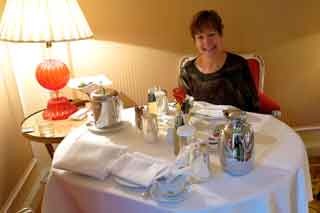 Ana prepares to dig in to our room-service breakfast of toast, tea, orange juice and ginger ale for me. A real bargoon at 75 euros.

The incident did result in an amusing experience. I wasn’t up for going very far from the hotel the next day – in fact, I needed to stay close to the bathroom – so I ordered a room service breakfast for Ana and I that made my $100 breakfast in Las Vegas last summer look cheap. Some toast and honey for the both of us, with tea for Ana, a couple of glasses of orange juice and two tiny bottles of ginger ale set us back about 75 euros. At least we didn’t order the champagne breakfast for two, which came in at a cool 225 euros, gratuity extra of course.

Our hotel in Vienna – the Imperial – was a tourist attraction in itself. We stayed in a beautiful room tucked under the eves, probably the servants’ quarters in the good old days. The bathroom, which was completely done in marble and featured its own chandelier, was bigger than our hotel room in Budapest. After a long day of walking, Ana liked to soak in the huge Jacuzzi-style tub. The hotel had a restaurant that had just been rated with a Michelin star; we didn’t even bother to look at the prices, which were hidden away from the public areas. The hotel was also featured on the hop-on hop-off bus tour. 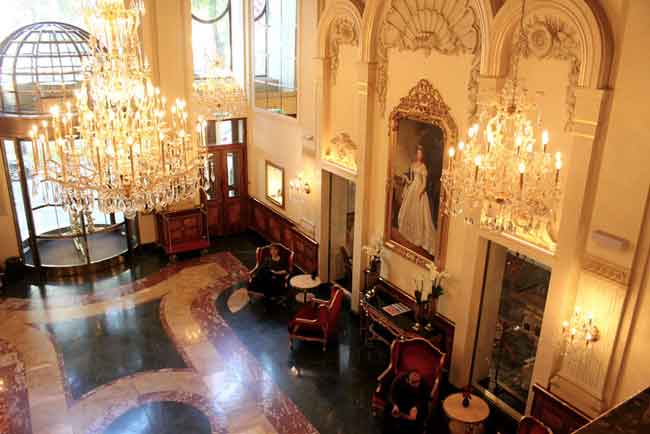 Ana relaxes in the lobby of the Hotel Imperial in Vienna.

In Vienna, Budapest and Copenhagen, we bought tickets for the hop-on hop-off bus. As I started to feel a bit better in Vienna, but not yet up for long walks, we just sat on the bus and took in the sights. The buses are a good idea, taking the hassle out of finding your way to a city’s sights. They are expensive, at 25-35 euros for a 48-hour ticket. Once you see a few of the sights and get oriented, though, you ask yourself why you paid this much for the ticket when you could have taken a tram or the metro. In fact, these buses are not a good substitute for public transit, as they run only one way around their circuit.

They did, however, provide a view of the city and its neighbourhoods that we wouldn’t have seen within the Ringstrasse: its canals and extensive network of parks, which we heard take up 30% of the city’s space, its markets, its far-flung palaces and its districts of working- and middle-class apartments, built to replace the one-third of its residential buildings that were devastated in the Second World War. Staying where we did was an unforgettable experience but if we returned, we’d probably pick accommodations within the real city.

Ana and I have always agreed that we wouldn’t travel to the same place twice (except for my football trips to Wigan, UK, of course). But as we get older and are just not up for the more adventurous trips we took in our youth, I see Vienna as a place we could revisit.