An old way of life survives

Our first sight of Zinacantán, a Maya village nestled in the hills above San Cristobál, was impressive for the dozens of greenhouses and plots roofed with huge sheets of plastic. We had seen similar structures near Demré in Turkey but there, they were used to protect tomatoes and cucumbers which were being grown out of season. In Zinacantán, however, they protected flowers. 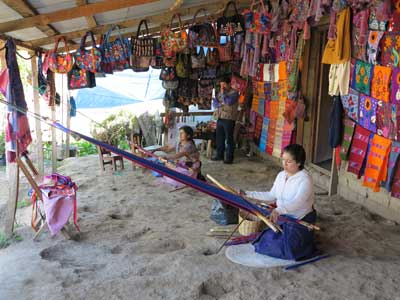 Women weave in the traditional way in Maya village of Zinacantán. We had permission to take the photos. Our tour driver looks on.

Growing flowers is the main agricultural activity in this traditional Maya village, which is not to say that other things don’t grow here too. We passed a woman loading a wheelbarrow full of radishes. They were as big as sizeable tomatoes, even bigger than the ones that astonished me in the mercado publico in Mérida last year. I wished we could have stopped and eaten a few (or maybe only one; it would probably have made a complete lunch).

As part of our tour of two Maya villages, I was hoping we’d have some time to walk around Zinacantán. Such was not to be the case, however. Although the village had a very interesting-looking church, I later learned photos were not permitted anywhere around it and it was probably just as well we didn’t stop.

But our time here was not wasted; far from it. We visited a traditional Maya extended family whose female members were engaged in making beautiful woven crafts for the tourist trade. Julio, our guide, told us that in traditional families, the men were farmers and the women engaged in commerce which, in this case, meant the souvenir trade. 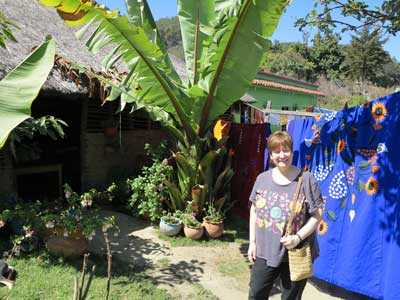 Ana poses beside a lovely quilt in the courtyard of the artisans' home we visited.

The women in this family made incredible creations from wool and cotton. The patterns and colours were completely amazing. One of the jackets we saw, worn by the groom at a wedding, sold for 9,000 pesos, about $850.

I will not even attempt to describe the beauty of the woven objects we saw; I’ll leave that to the photos which I’ll be able to upload once we’re home.

A pox on us

Part of our visit involved trying a shot of Pox (pronounced “Posh”), a vile-tasting locally-made liquor that reminded me of the tequila I haven’t drank for years. Julio, however, said the concoction was good for an upset stomach, which I had after being a little (or maybe a lot) too liberal with the chiles at dinner the night before. While it was hard to get the pox down, incredibly, it settled my stomach. 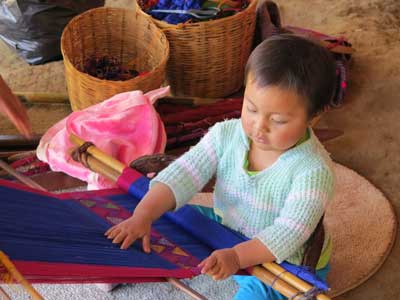 Cintia (hope I'm spelling her name right), at one and a half, can't wait to get in on the action.

(Afterwards, at our hotel, when I asked where we could buy some as gifts, our hosts directed us to the Posheria, where we could be assured of the quality. “They sell it at the market, but don’t buy it there,” said Francesca. “If you’re buying it for friends, they won’t be friends after they drink it.” I think that was the kind we tried in Zinacantán. The clerk at a local higher-end liquor store just laughed when I asked if they had it. )

Another highlight of our family visit was the time we spent in the traditional kitchen hut. An old woman made corn tortillas from scratch – including grinding the corn into flour – over a smoky fire. She invited us to try her tacos: large black beans I had never seen before, local goat cheese and a sprinkling of delicious ground pumpkin seeds.

The tour continued to San Juan Chamula, the subject of another post here.

One Response to An old way of life survives