Rumble in the jungle near Palenqué 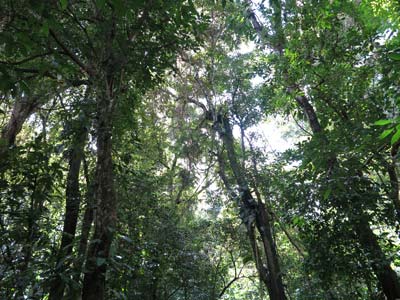 The cathedral of the jungle canopy.

The best part of the tour of the Maya ruins near Palenqué started when we left the discovered area and entered the jungle. Our guide Marcos lifted a tape which barred the way to a path. Guides like Marcos helped to maintain the path, taking time every year to keep it as clear as possible and to line it with small stones. I guess it had been a while since the last maintenance effort; thus the tape which barred entry.

When we left the beaten path, so to speak, we suddenly entered a different world of silence and constant twilight. The tallest trees, among them mahogany, soared what seemed to be a hundred feet in the air, forming a dense canopy that kept the ground in constant shade. Below their canopy was a variety of shorter trees (including cedar) and giant ferns. Below them were many examples of the tropical plants we keep in our houses in Canada. 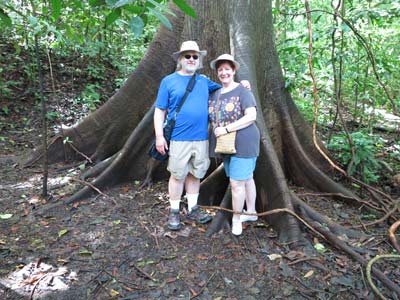 Ana and I mug for the camera at the foot of a huge tree.

The ground, always damp and frequently very muddy, was covered with stones – stones which had been used to construct other buildings in the Maya city. For the first time, we got a sense of what the Spanish explorers of the 16th century saw but did not appreciate. Three centuries later, the English, Germans and Americans realized the significance of what was before their eyes. What at first glance were mounds covered by vegetation turned out to be well-built walls of the city’s structures. The stones which covered the path were part of these structures.

The footing was treacherous and everything was wet. Where there weren’t slippery stones underfoot, there was a thick soup of rotting vegetation, much of it in the middle of trickling rivulets from the rocks above.

There were huge Tarzan-like vines hanging from the trees. Some of the vines were parasites; they would grow on the outside of the tree, slowly choking the life out of it, until they were the only living thing on its trunk. Giant ferns had thin trunks covered with needle-like spines that would cause untold hurt if you tried to grab one to secure your footing. Some ferns had leaves with edges so sharp they would cut your shirt if they brushed against you.

We saw our first termite nest about half an hour into the walk. To look at it, you would think it was a rock, and a big one at that. The nest was close to three feet high and a couple of feet wide. Marcos scratched the surface and dozens, if not hundreds, of the little beasts were revealed, crawling their way around on their business. They seemed smaller than our termites, although I couldn’t be sure. 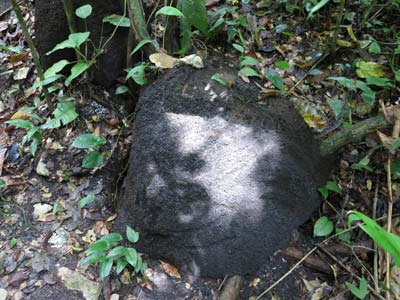 Good eatin' at the termite nest.

“These are nice fat ones,” said Marcos as he licked his finger and stuck it into the writhing mass, ensuring that a number of the little buggers would adhere. “These are very good. Give it a try!” And so saying, he popped his finger into his mouth and licked the little beasties off of it.

Ana, a vegetarian and never one to find insects appetizing, recoiled in horror and disgust. Seeing her reaction, I wasn’t going to take Marcos’ suggestion. But he was urging me on, and when he said they tasted like mint, I knew I had to try some. So I stuck my finger into the group of exposed termites and popped it into my mouth.

I must say, they were delicious, and they did indeed taste like mint. Bite ’em for a burst o’ flavour, as the wrapping on sour candy used to say when I was a kid. The only slightly disturbing sensation was not knowing whether I had actually swallowed them or not, since they were so small. I had to run my tongue over my teeth to make sure there weren’t some little pieces left.

Were they a candy or a breath mint? Hard to say. But if I ever get lost in the jungle – and my god, how easy that would be – I know one of the foods I would be looking for to survive.

The termites’ nest was an example of something Marcos constantly pointed out: everything the Maya needed was growing in the jungle. From animals to medicinal plants, to fruit that was used for glue, the jungle had it all.

Speaking of glue, I found a piece of fruit from a zapote tree on the path. It looked a bit like a mango and I asked Marcos what it was. Pulling out his pocket knife, he cut the top off the fruit and invited us to touch the oozing zap. It was like superglue; Ana could barely separate her fingers. The glue was used in the mortar the Maya used in building their temples and palaces, Marcos told us. We had to wait until we were back in town to wash our hands with soap and water before the stickiness disappeared.

Continuing our walk, we gradually descended, being very careful and slow to make sure we didn’t lose our footing. It was like being in the caves at Loltun, except there was light. I was extra careful to make sure I didn’t fall and wreck another camera, as I had at Loltun. 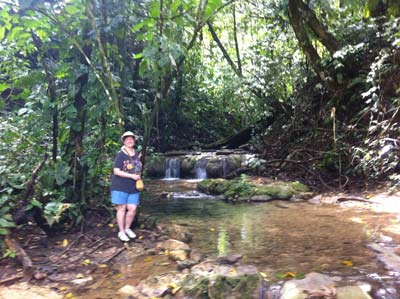 Ana poses beside one of the waterfalls we came across.

We forded a small mountain stream and began to hear the sound of a waterfall, which got louder as we descended. At one point, Marcos, at the foot of a giant tree, told me to climb a small mound and I would see a tomb. Sure enough, there was a small opening in the rock, so hidden you would never see it if you walked by. Not knowing what would be living there, including the possibility of poisonous snakes, I looked no further than the stone lintel and the opening which marked the tomb before climbing back down to the path.

Now, Marcos took us off the path again. Around here, he said, had been the residence of a rich Maya. Near the waterfall, he could draw water away to provide for his house. At one time, he believed, steps led down to the waterfall for the enjoyment of this Maya’s family. Again, we left the beaten path to climb down a steep slope, where tree roots and the remains of what might have been stairs provided footholds. At the bottom, we reached a beautiful waterfall, where Marcos said he often took his children to swim. 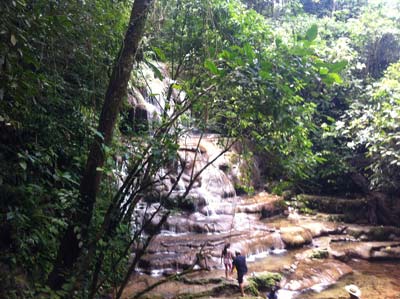 Marcos filled his water bottle with the clear, cold liquid, and quickly drank it down. I tried some, and it had a mineral taste, but it was delicious and cold.

From the falls, a short path led back to the road, where we caught a collectivo back to the town. By this time, Marcos had told us his life story, and a very thought-provoking one it was. In my next post, I will try and repeat it.