The Maya ruins of Palenqué

Today we saw the Maya ruins of Palenqué. But it was not the ruins themselves, spectacular though they were, that were the highlight of our day. That was reserved for the amazing jungle walk we took, the incredible life story of our Maya guide, and the minty taste of the live termites I ate. 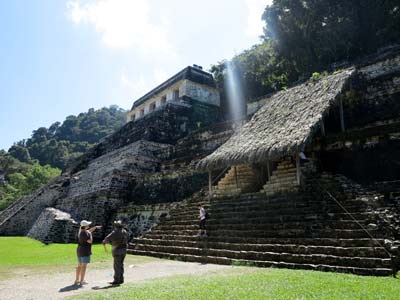 The tomb of the red queen, with the tomb of Pakal in the background. The ray of light is surely a trick of the lens, and not the kind of effect the Maya intended. At least I assume so...

We had always intended to hire a guide when we got to the ruins, and when our cab stopped at the entrance, several were waiting for us. Marcos (not his real name) spoke very good English, so he was the logical choice.

According to Marcos, Palenqué was one of the great centres of Maya power, with a population of more than 80,000, before a year of heavy rains around 1100 AD ruined the maize crop and caused the people to revolt against their king. The city was abandoned, marking the effective end of the Classic period of Maya civilization. After the city was left to the jungle, the people moved down to the Yucatan to build the major cities of the post-classic period, like Uxmal and Chichen Itza, both of which we were able to visit last year.

Numbers from one to four were written as dots at the bottom of a square. Five was a line which covered or replaced the dots. The numerals 10, 15 and 20 were also lines within the same square. So if a Maya wanted to write the number 17, he would draw a square with three horizontal lines rising from the bottom, and two dots in a line at the top of the square’s interior. 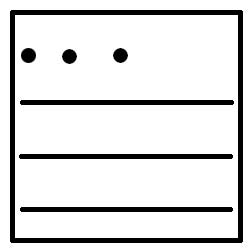 Maya representation of the number 18, according to our guide.

If they needed to write a number between 20 and forty, they would draw another square on top of the first, with lines and dots in the interior representing sets of 20.

As we had discovered at other Maya sites, the buildings were calendars in and of themselves, and the position of the sun made it shine through their various windows. At the summer equinox, for example, the sun would cause the interior of the comb on one of the temples to light up as if a giant light switch had been thrown. When the king anointed his successor, holding him in the path of this light made it seem as though he was being fingered for greatness by the sun god. The common people, forbidden from climbing the temples, saw these phenomenon as signs that their gods were all-powerful and all-knowing.

But the light shows weren’t always about awing the populace. Some of them, depending on how they were oriented, marked the dates for planting crops, harvesting and burning the fields to fertilize the soil for the next planting season. In this way, the upper class and the gods provided ordinary Maya with the entire framework of their lives.

What good was Jesus?

This, according to Marcos, was the reason Christianity was slow to catch on. Did Jesus tell the people when crops should be planted or harvested? No, he couldn’t; therefore, what use was he? What good was a religion that didn’t provide rules and assurances for every period of the year?

In fact, the reluctance of the Maya to give up their old ways was the main reason for their mass slaughter at the hands of the Spanish, Marcos said. The people who remained around Palenqué when the Spanish invaded were not co-operative and reluctant to abandon their old ways. Besides killing the people, the Spanish modified Catholicism so as to make it more in tune with the old religion.

Marcos had vivid descriptions of the lives of the common people. Basically, they were slaves who were worked to death. When the big temples of Palenqué were excavated, the bones of hundreds of workers were discovered. Their bodies had been thrown into the walls and made part of the material used to construct the buildings. Marcos said the upper classes, who jealously guarded their knowledge, kept the people in line with copious supplies of corn-based alcohol and with a policy that allowed every man to have more than one wife.

Marcos was self-educated, and some of his theories may be regarded as far-fetched. One of the other guides laughed at him behind his back, calling him “loco” and making twirling motions with his fingers at the side of his head. He was an intense young man, and the story he later told us as we got to know him better provided the explanation.

The ruins themselves were spectacular against the setting of the jungle. Even better, we were able to go inside of the tomb of the red queen and the palace of Pakal, the king who ruled Palenqué for 70 years. The palace was spooky and its narrow corridors dripped with condensation. It would not have been like that in its heyday, Marcos explained. The remains of the stucco which formerly covered walls, ceilings and the outside of the structures were as thick as four fingers. Bedrooms were oriented towards the east, where it was coolest. No torches were used to illuminate the interiors; candles and ingeniously-placed quartz mirrors did the job. The mirrors reflected the sunlight into the deepest recesses of the palace. The courtyards, the toilets flushed by running water from the nearby aqueduct and the depiction of life in the king’s court were fascinating. The prospect of climbing to Pakal’s tomb – closed to the public but, according to Marcos, possible to see with a few phone calls to the right people – was intriguing.

The Spanish didn’t stay in Palenqué. It was simply too hot and humid for them. So they moved to San Cristobal, higher in the mountains and much cooler. They forced many Maya to move their with them, which accounts for the indigenous populations that live there today.

As for the termites and the guide’s life story, those are for subsequent posts.