A thrill ride to Tilaran 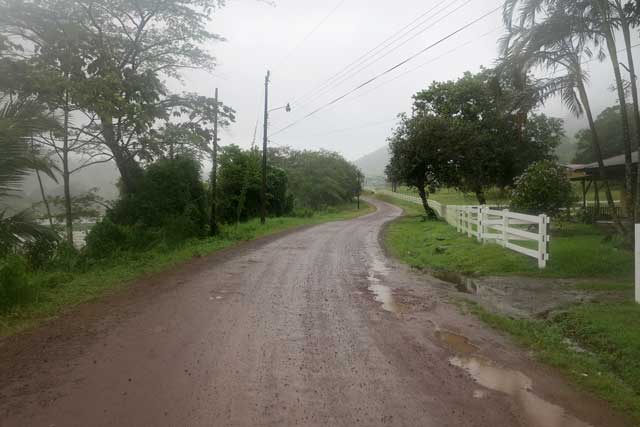 The end of our 35-km, 2 1/2-hour journey near Tilaran. Aside from the vegetation, it reminded me of England or Ireland on a wet day.

There must have been a mistake; that was my reaction when our schedule said it would take four hours to get to Arenal from Monteverde. The boat across the lake takes half an hour or so and the shuttle to our hotel takes 20 minutes, so where does three hours get lost in the 35-km. drive to Tilaran, where we get the boat?

Luxuriating in the fact we were the only passengers on our tourist minibus, we slung our bags on the seats around us and looked forward to the ride. Part of the route was along the terrible road we had taken the day before to a coffee plantation, but we had still made fairly decent time on that trip.

But we discovered our drive the day before was on the good part of the road, and as we moved beyond the last village, we seemed to enter another world. The lush green mountain landscape was veiled with mist. The hills and valleys were decked out in a palette of soft greens. The odd rustic cabin told of its occupants’ rural lifestyle. The heights, partly hidden in the mist, were covered with thick forest.

The road degenerated into a mud track and, as we streaked along at a speed of what must have been at least 10 kph, we were thrown violently about from both the successes and failures of our driver’s evasive action against potholes, ruts and washouts.

I wanted to take some pictures, but we were being tossed around so much I didn’t feel like moving from my seat to grab a camera. And the constant rain was streaking the windows.

We had to stop a number of times as the driver figured out the best way around a washout or through a shallow ditch. Once, things got so bad that he took out his phone and took some pictures through the front window, probably to report the problem to whoever took care of the road.

The farther from Monteverde we got, the fewer private cars we saw. It seemed motorcycles – dirt bikes, to be more precise – were the best way to get around on this road. Occasionally, we met a rattletrap old truck, undoubtedly aged prematurely by the daily grind. For a while, we followed a local bus, Route 598, that made frequent stops to pick up farmers and villagers.

While it was noisy in the bus, we could sense the calm quiet of the countryside. The colours and the air reminded me of Ireland without the exotic vegetation. The houses in the small villages were neat and well kept.

The rain was the same sort of mist we experienced in Monteverde, except, in the peaks of the low mountains, it became quite heavy, forcing us to stop a couple of times as visibility was reduced to zero. 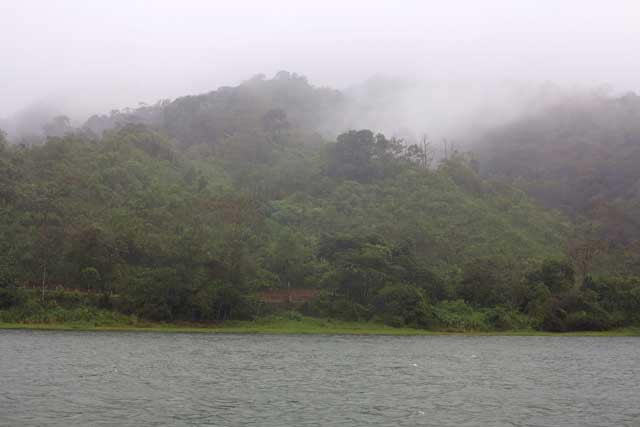 The misty shores of Lake Arenal. This artificial lake provides hydroelectric power to the region.

After more than two and a half hours in the bus, we reached our destination, a closed restaurant opposite the shore of Lake Arenal. With the engine off and no road noise, it was indeed quiet here. We were met by a few kids who looked about 12 years old. They balanced our heavy bags on their backs as they clambered down a mud track to the arriving boat, which unloaded half a dozen tourists for the trip to Monteverde.

The boat was captained by a young woman, who talked with Ana about career choices for women in Costa Rica. A smooth ride across the lake and we were met by a van to our hotel. 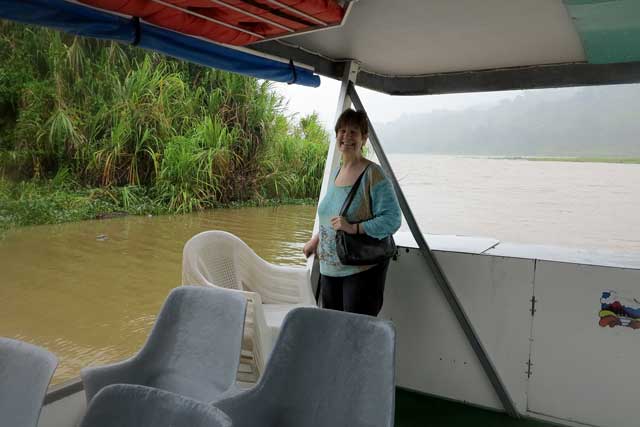