An excursion to the Caño Negro, more or less 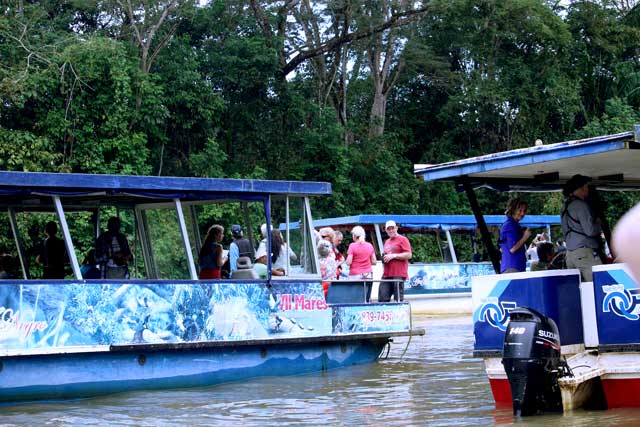 “Look, Marlin, we got one!” Tour boats jockey for position to give tourists the best views of birds and animals along the Rio Frio.

The Caño Negro boat tour is advertised as a way to see Costa Rican wildlife in its natural habitat, in a location where it flourishes in the richness of its environment near Lake Nicaragua. All kinds of birds, mammals and fish make this area their home, including the world’s only freshwater sharks.

Tour operators offer day-long excursions to the area from La Fortuna to the Rio Frio, only a few miles from the Nicaraguan border. A tour bus picked us up at our hotel at about 8:00, and we got back at about 4:00. The excursion includes a round trip of about two hours each way, lunch and about two and a half hours on the river. 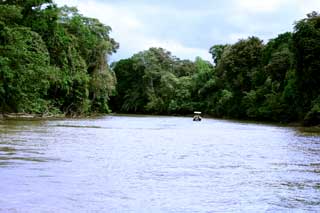 A sunny afternoon on the Rio Frio.

Two small busloads of tourists made their way to a catamaran which holds about 40 people, where two knowledgeable guides pointed out the many varieties of birds and spent some time helping us to look for the several kinds of monkeys that moved through the trees on the banks of the river and a mother sloth with her baby. We saw three kinds of lizards, including some medium-sized, fierce-looking caymans, relatives of the alligator. A special treat was a look at a big blue heron grabbing a fish, and the fish squirming out of its bill. 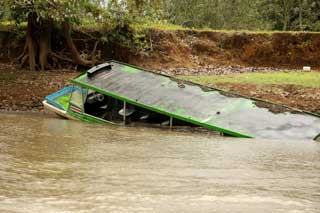 Gilligan’s Island meets the Rio Frio. Hopefully this little mishap took place when no one was aboard.

The tour companies are careful not to describe the river itself as a wilderness, because it certainly is not; nor is it in the Caño Negro wildlife preserve. Near the town of Los Chiles, it winds its way through farmland that is actively worked. What appears at first to be forest along the banks of the river soon reveals itself as a narrow band of trees that does not quite succeed in hiding the farmland behind. The occasional cow competes with the wildlife for the attention of the boat passengers, as do the small groups of Tico farmers and their families who picnic on the river’s banks. The foliage, birds and animals along the banks live with occasional discarded plastic bags and bottles that are snagged in the sunken branches.

Our boat, powered by a gasoline engine, was one of a number on the river. Once, there was even a bit of a traffic jam as a flotilla of half a dozen private and tourist craft competed for space. The boats were also loud, especially when the drivers revved their engines to reverse or stop. Waves from their wakes created turbulence along the banks as they washed up against the sides of the river.

For all of that, we saw some beautiful birds and animals that we certainly didn’t see in the Monteverde cloud forest preserve. And even the ride back and forth gave us a chance to see a big chunk of the central north of the country. I noted two Petro-Canada signs on car repair shops among the farms, small villages and a sugar cane refinery along the way. As a bonus, we got a clear view of the Arenal volcano from our bus on the way out, something that only 15% of visitors ever see, according to a La Fortuna resident. Sure enough, we never got a clear view for the rest of our stay.

We enjoyed the day. But I would do more research next time and make sure I went to the wildlife preserve itself. This might have involved a stay in Los Chiles and we would have probably spent almost a whole day in the national park.