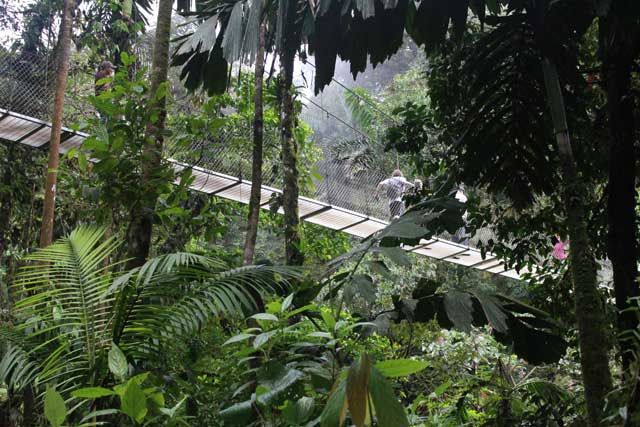 Hey, it’s only 150 feet to the ground. And it does look sorta sturdy.

I must admit that I was not a particularly happy camper as we traversed the first of the hanging bridges at El Mistico park outside Arenal, Costa Rica. I’m not particularly fond of heights and crossing the first swaying suspension bridge more than a hundred feet in the air didn’t do much for my enjoyment of the spectacular rainforest and the incredible views of the upper tree canopy.

It didn’t help that an 11-year-old kid was jumping up and down in defiance of the rules. The open metal grid that acted as the floor of the bridge gave me an excellent look at what I was sure was to be the fall to my doom when the bolts holding the bottom of the bridge to the suspension cables broke. And the chain-link barrier on either side reminded me more of my backyard fence than a safety system. 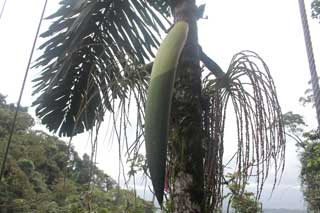 I’d wondered what these cucumber-like growths looked like up close. On a hanging bridge I got the chance to see one.

The kid’s mother luckily clamped down on his behavior, giving him a severe scolding for behaviour that she said was putting everyone’s life at risk. I suppose it really wasn’t, but once the kid stopped, the bridge seemed a lot more solid and I started to enjoy the once-in-a-lifetime vistas.

El Mistico is a privately owned 12-hectare preserve but according to Milton, our bilingual guide from Arenal Adventure Tours, it provides a much better look at the rainforest than the nearby national park. In 1968, Arenal’s volcano blew its top and destroyed the old-growth forest that had covered its slopes.

“The forest in the national park is secondary growth,” he said. “It’s nice, but there aren’t as many animals and there are a lot of open spaces between the trees.”

The rainforest walk covered about two-and-a-half twisting miles through the old-growth forest. The bridges provided spectacular views from as much as 150 feet off the forest floor midway up one of the hills surrounding Lake Arenal. 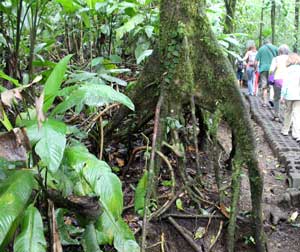 The root structure of the walking palm enables it to bend with the winds.

The bridges and pathways provided views of all four layers of the rainforest canopy (can’t think of what they are at the moment). At ground level, you could look up and see the structure of the trees and their root systems. But above the forest, there was a whole new way to see the ecosystem.

For me, the great beauty of the rain forest was the interplay of light on countless shades of green. At ground level, they formed a luxurious tapestry of shapes and reflections. From above, the glistening leaves formed a multitude of layers, slight gradations between from the light at the top to the mysterious darkness of the depths. You could get a better look at the crowns of the broccoli trees (as they call them) or the seed pods of the palms high in the canopy.

Our guide pointed out the roots of a “walking palm” when we were on the forest floor. He described how its partially visible root structure allowed it to sway with the wind. A demonstration came 100 feet off the ground, when he showed us how easy it was to push the top the tree an arm’s length away.

Luckily, the day, which started out to be quite cloudy and misty, cleared up and we made most of our walk in bright sunshine—at least, as much of it as penetrated the thick canopy. A fellow tourist who researched rain forests told me less than 10% of the light from the sun actually reaches ground level through the thick vegetation. 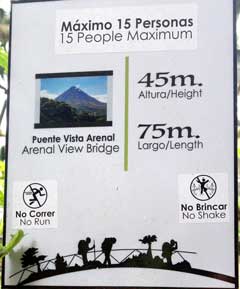 This was a facility that was used by a lot of people, so there were a very limited number of animals on view. We saw a couple of tiny yellow snakes that turned out to be deadly vipers. (At first, I thought one of the snakes was a flower; had I touched it, I undoubtedly would have had to go to the hospital.) There were a few birds and a sloth on the way to the park. Near the end of our walk, we heard the growling of the howler monkeys, who could have been as far as five miles away. The eerie sounds added to the thick atmosphere.

The real animal sighting of the day was from the bus on the way back to our hotel, when a whole community of coatimundis came down to the road hoping for snacks. We must have seen close to 50 of the critters, which look a bit like our raccoons. Sadly, some of the people were tossing food to lure them out of the surrounding bush. It seems the females and young congregate in these packs while the males tend to be loners.

There would not have been too much point in going to the park without a guide, since the paths were crowded and there wouldn’t have been much of a feeling of solitude as we experienced in Monteverde. And we had the benefit of the guide’s knowledge of the local flora and fauna.

The pathways were easy to walk and well maintained. Although the walk included some fairly steep hills, I found they didn’t trouble me, despite my advancing years and wonky heart.

As for my fear of heights, with the exception of the kid jumping on the bridge, I enjoyed the experience enough to stop and take a few snapshots here and there. The bridges themselves are suspended from thick steel cables that are anchored into concrete abutments (I think that’s what they’re called) at either end. The floor is a heavy-guage steel-mesh platform which looks more than up to the task of supporting 15 people. I felt confident the structure would not collapse. But then again, what do I know?

In the end, it was a pleasant, if somewhat crowded way to spend a morning. There were about a dozen people in our group, and about the same in the many other groups we encountered. This resulted in waits at some of the bridges, especially if a guide stopped a group tour for a look at a small animal. (Only 15 people at a time were allowed on the bridges.) And there was always the sound of conversations around you. But you meet some pleasant people, and it’s a good morning’s stroll through an environment that bowls you over with its fecundity.

If you ever wanted to go without a guide, El Mistico has a storefront in the centre of La Fortuna where you can buy tickets. The park is about 20 minutes south of the town.