Not that we had given it the slightest thought when we booked our trip, but we lucked in at Graz on our way back, spending a couple of days in the midst of the annual Advent celebration, or Frost Fest (Frohes Fest) for the more secularly inclined. 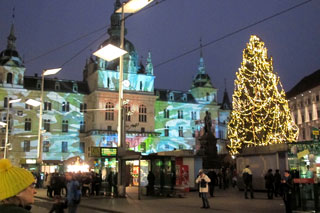 The spectacular town hall in Graz's altstadt becomes part of the show. 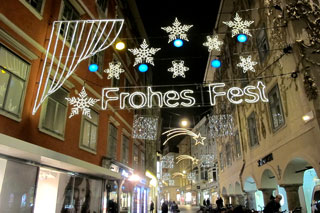 Christmas lights were strung across the streets of the old town in Graz. 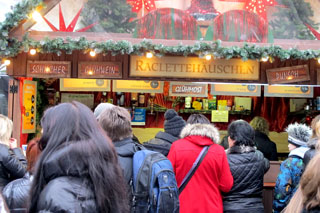 Part of the fun was getting hot drinks at the many refreshment huts.

It was a phenomenon similar to one we had seen in Spain, where entire squares and plazas were taken over by agglomerations of small huts, selling Christmas wares. Here (and in Slovenia) they add food and drinks, most of them hot concoctions made with beer, wine or liquers.

The only problem with these Xmas markets, from my admittedly selfish POV, is that they block the perspective and scale of the plazas they occupy. However, the one in the main square of the Altstadt (old town) in Graz had plenty of its own attractions.

Ana and I had fresh-made waffles at one of the huts, hers topped with apple sauce and mine with a rich vanilla. The many huts selling hot alcoholic drinks – often out of large metal vessels about the size of the biggest coffee percolator you have ever seen – were doing a brisk business. Some vendors were roasting chestnuts. Other huts sold specialized Xmas accessories. One was devoted only to angels. Another sold decorations mostly in the shape of hearts. A special booth with clowns entertained the kiddies. I didn’t notice anyone selling Christmas trees in the main square, but they were available at all of the smaller markets.

Everywhere on the main square in front of the spectacular town hall, hundreds if not thousands of people helped the Christmas (or winter) spirit flow. A light show in holiday colours flashed across the facade of the historic city hall. Lights and Christmas trees were hung from chains that stretched across the streets; the trees festooned with lights and suspended upside down.

When we checked into our hotel on Lendplatz, a short walk from the Altstadt, they gave us an excellent free guide to the city which includes a number of walking tours around the Altstadt and its environs. We wanted to see at least two museums and tour the old town (a UNESCO heritage site), which pretty much took up our limited time. With the weather a bit cold and misty, we ended up visiting three museums and skipping some of the outdoor attractions. So we missed the view from the Schlossberg, a steep rocky outcropping that dominates the town.

Still, Graz was a magical place in mid-December. Near the end of our four-hour meander through the Altstadt, we ran into a series of small plazas, each with its own Christmas market. Here, craftspeople sold high-quality woodwork, pottery, glass and ceramic ware. We were able to buy a unique gift for Ana’s sister, making us ready for the reward of a hot dinner as the sun set.