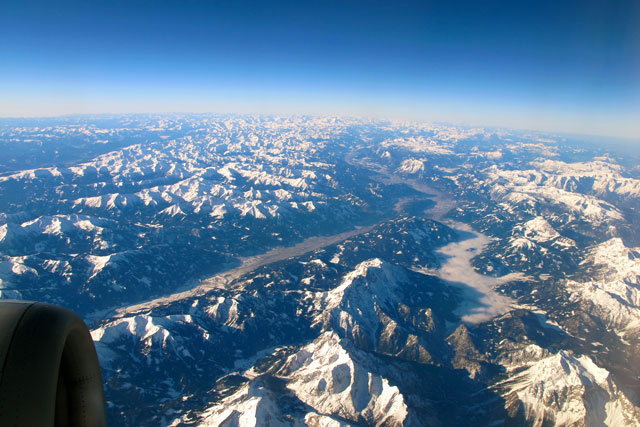 Spectacular views of the Alps on the way to Graz.

After an overnight flight on Lufthansa and an hour-long walk between terminals in the Frankfurt airport, we boarded a rattletrap Boeing 737-300 that was showing its age for our connecting flight to Graz (pronounced “Gratz”), Austria’s second biggest city, with a population of about 250,000.

It was good to see the bright sunshine as we climbed to our cruising altitude, and the spectacular scenery compelled us to spend the flight looking out the window. The Alps were majestic in silver-grey and white. Craggy, snow-covered peaks rose through the clouds and through the occasional break in the cover, we glimpsed snaking rivers of quicksilver winding through deep green valleys, sometimes bisecting towns and villages along their winding courses.

As we got nearer to Graz, the peaks were replaced by foothills and a fertile green countryside dotted with settlements. As we descended, the towns revealed colourful buildings of orange, yellow and green. 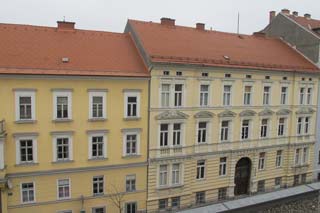 Landing at Graz’s tiny airport, the impression was that we had arrived at a small village rather than Austria’s second biggest city. The houses were built in an Alpine style, with steep roofs, colourful stucco walls and second-floor balconies such as are illustrated in photos of mountain chalets in Switzerland. The air was clean and fresh, the kind of air you could almost taste.

A 15-minute train ride that cost all of $3 apiece took us into the centre of Graz, where we quickly found our hotel – the Europa – directly across the road from the station. A two-hour nap after our 12-hour journey across seven time zones revived us to the point where we were ready to venture out for dinner.

Our first impressions of Graz were of an old city populated by youth, many of whom attended the four unversities there. The stately buildings gave us then impression of a monumental city, although not on the scale of places like Rome, Barcelona or Madrid. Indeed, the city had the atmosphere of a much smaller town: compact, clean and friendly. 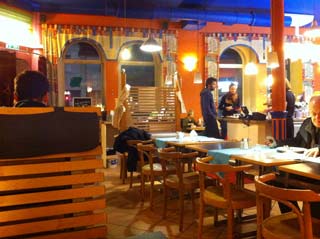 The colourful interior of the Ginko Restaurant at the southern edge of Graz's old town.

We had an excellent vegetarian dinner at a restaurant called Ginko, one of the most well-reviewed of Graz’s hundreds of eating establishments. The restaurant was set up cafeteria-style, and you paid by the weight of your meal. The two of us ate for about 30 euros, including a bottle of lychee-flavoured soda.

It was a warm evening for the time of year – an outdoor thermometer said nine degrees centigrade – so we decided to wander the streets on the edge of the old town. Although the stores were closed, there were plenty of people on the streets. A lot of them were drinking beer or hot chocolate and eating snacks (it looked like sausage was a universal favourite) at outdoor kiosks in the many squares we stumbled across. At some of these, the crowds were so thick it was difficult to get through. We wondered if the kiosks were seasonal. We passed the opera house, art galleries and expensive-looking bars and cafés before we found ourselves at a central meeting point for five or so tram lines, any of which would take us to the hauptbanhof across from our hotel. 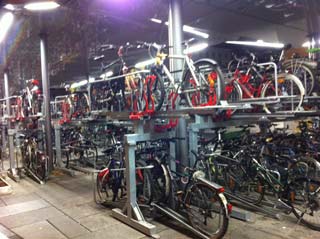 Double-deck bike parking at the hauptbanhof (central station) in Graz.

We decided to go for a bedtime snack before turning in, at a quintessentially European coffee shop beside our hotel. Graz is known for its pastries and this elegant coffee shop did not disappoint. We decided on coconut cupcakes. The cupcakes themselves were about two inches high, topped with about four inches of delicious coconut icing.

Our first impressions of the city were very favourable and we are looking forward to returning for a couple of days after our three-day stay in Mirabor.