Hanging out at the John Bull Chophouse 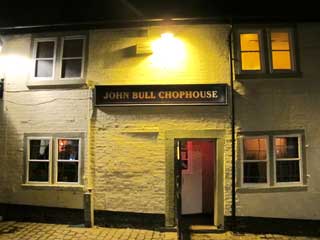 Seen from the outside on a cold night in March, the John Bull Chophouse promises warmth and companionship. 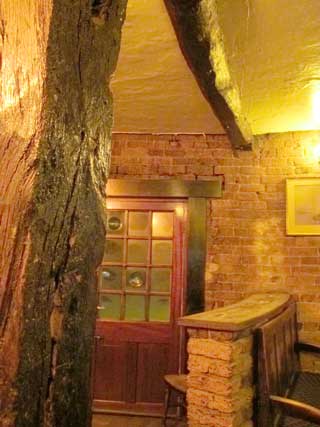 Interior of the John Bull Chophouse, which some say started life as a slaughterhouse in the 16th century. 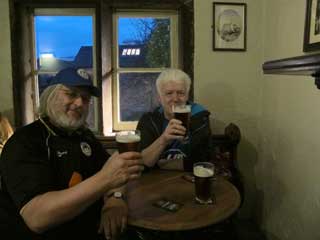 Enjoying a pint with our buddy George on our 2013 trip. 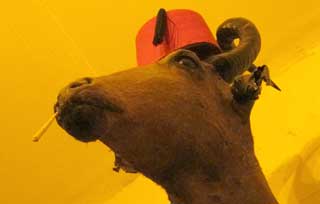 What exactly is that camel smoking in the John Bull Chophouse? 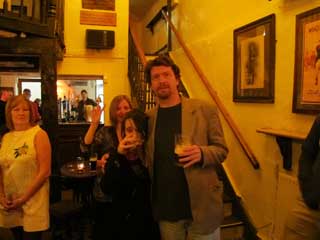 The John Bull Chophouse has to be one of the finest pubs in the world. From the ambience and warmth of the 18th-century building, to the stuffed front quarter of a camel smoking a cigarette (if indeed it is a cigarette), to the metal rock on the high-fidelity jukebox, to the friendly patrons hanging out for a smoke in the tiny public square in front of the establishment, to the superb locally-brewed Thwaites real ales, the John Bull is an inspirational place to drink.

Tucked away in an alleyway called The Wiend, which I believe is Wigan’s oldest street, the pub sits in front of a tiny square with a 10-foot high statue of a head lolling on the grass. “Come on over here and see this,” said a new friend. When we walked over to the spot, he pointed at the face and, lo and behold, one of the small ornamental trees in front of the sculpture looked like a Hitler mustache. Not that this is anything to do with the pub; indeed, an officer of the ultra-nationalist British Democratic Party says he was barred as a result of his political beliefs.

The CAMRA website (the association that promotes craft-brewed real ales) says the John Bull is a biker bar and plays ear-splitting heavy-rock music. That’s not exactly true anymore. Although the pub was, at one time a few years ago, owned by a biker, it no longer is. On our first visit in 2012, the music was Led Zepellin, Black Sabbath, Ozzie Osborne and all the favourite 1970s hard-rock tunes. On our most recent visit, in May of 2013, the tunes were decidedly more modern and less heavy which, as far as I was concerned, was a pity.

On a pleasant May evening, accompanying Jim on a smoke break, we met a group of friendly patrons in the square outside. We soon became good buddies, talking about our lives and our plans. It ended up as another talk about deindustrialization in the northwest. One of our new friends had had a skilled job operating heavy machinery on big construction sites; now he was working in a pie factory in town. He accepted his lot with good cheer, but looked interested when I told him about skilled-job opportunities here. Nevertheless, I got the feeling that this was home for him and moving was not in the cards.

What would hold a person in Wigan? Family, of course, but perhaps more: the feeling of being with friends in an old, old pub on a Saturday night; the warmth of the bricks and the Victorian architecture throughout the town; the quiet of the Liverpool-Leeds canal, reflecting a brilliant blue sky; the cultural patterns that have developed over many centuries and are now ingrained in the DNA. You can feel Lancashire life at the John Bull.