Maribor: a small city with a cosmopolitan feel

Maribor is an interesting small city in Slovenia where we spent three days with Ana’s cousin from Wigan Zosia and her husband George, who is my comrade-in-arms in support of Wigan Athletic Football Club (more about that later). 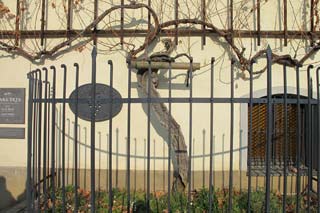 Allegedly, it is the oldest grape vine in the world, at 400-plus years of age 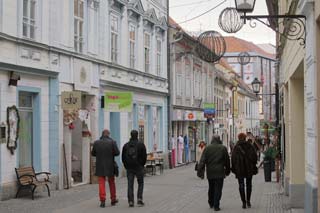 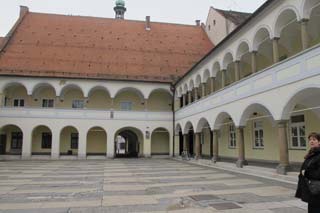 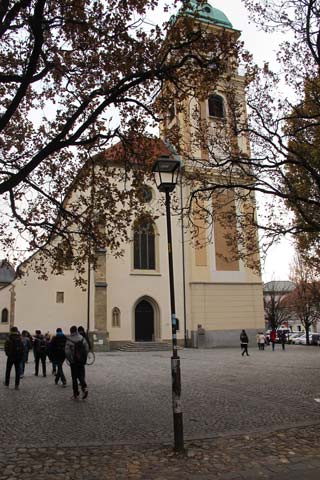 Maribor's small cathedral, which originally dates from the 12th century.

There are about 115,000 people in Maribor, of some two million in Slovenia. Yet the place has the feel of a much bigger city. Maybe it was its designation as the European Cultural Capital in 2012 by the European Union that gives the place its cosmopolitan feel.

There’s an attractive, pedestrianized, Old Town that can easily be walked in a day. While much of it is actually not that old, it has a quaint feel to it. There are some parts that are genuinely historic, such as the Plague Monument that commemorates the devastation visited on the town in the 17th century, the old city hall and the many beautiful houses and buildings on both sides of the Drava River.

The university also contributes some atmosphere, with students patronizing the many bars and cafés in the old town. Even in the zero-degree (celsius) evenings, you could see them crowding around outdoor stands to buy beer and coffee. (You had to love the price of beer: about €2.50 or $3.75 Cdn. per pint.)

We had never heard of Maribor and were surprised to find that it is the centre of a region where some excellent wines are produced from the many vineyards that surround the town. Had it been a bit warmer, we would have taken advantage of a day tour of the wineries. As it is, we did manage to visit what the townspeople claim to be the oldest grapevine in the world: a sturdy and woody 400-year-old vine that creeps along the side of a wine museum and produces a bumper crop of grapes from which wine is still made every year.

The small Maribor Cathedral, which dates from the 12th century, is also worth a visit. Originally built as a Romanesque structure, it gradually took on gothic characteristics as it was rebuilt over time after a series of fires. Of particular interest are the tombstones from the 17th century and before, formerly located in the church itself and in a former graveyard in what is now an attractive small park surrounding the cathedral, which are cemented to the outer walls.

There’s a small but interesting museum Ana and her cousin Zosia visited while George and I prepared for Wigan’s Europa League game against NK Maribor, and a 14th century synagogue, one of the oldest in Europe, that we somehow managed to miss.

Remnants of the former Tito regime remain in the form of heroic statues celebrating revolution and resistance, and in the odd Stalinist-looking building like the train station.

I doubt that our travels will ever take us back to Maribor, but it would be worth a day trip at least for someone who was visiting the region. It’s about an hour by train from Graz, Austria and about two hours from the Slovenian capital of Ljubljana.