This is what being a fan is all about

It was a new era for Wigan Athletic, the British Football League club I follow. The club, founded in 1932, made it to the Barclay’s Premier League, probably the best league in the world of football, and stayed there for eight years before being relegated to the Championship, England’s second division. 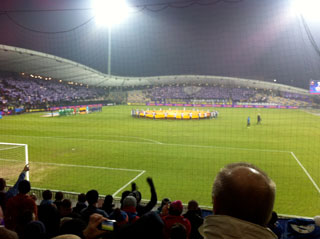 Pre-game ceremonies at the Stadion in Maribor, a modern facility that holds about 12,000. 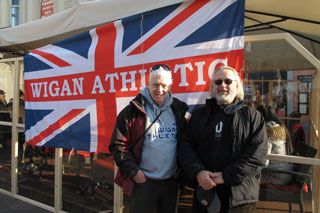 George and I pose for a photo before the pre-game activity.

But they went out for a bang, winning last year’s FA Cup, a knockout competition of virtually every one of the hundreds of teams in British football. As FA Cup winners, they received automatic entry into the UEFA Europa League, a league of several dozens of clubs from around Europe. They were in a group with Zulte of Belgium, Maribor of Slovenia and Rubin Kazan of Russia.

I’ve made a number of friends in Wigan since visiting the town a couple of times and hanging out with my buddy George, hudband of Ana’s cousin. It’s a great place and for a town of about 75,000 people to have their club win the FA Cup – football’s oldest and one of its most prestigious trophies – is an accomplishment that can only be described as awe-inspiring.

Buddy Jim and I have achieved the status of minor celebrities in the town as Canadian supporters. Indeed, with our other buddy Doug of League of Gentlemen fame, we have founded our own supporters’ club, the Toronto Wigan Athletic Travelling Supporters. This year, I represented us in Wigan’s final game in Slovenia against Maribor.

It was a chance for Ana to meet her cousin Zosia after a hiatus of about 50 years, and for George and I to get together for some football and a lot of pre- and post-game beers, not to mention meeting lots of Wiganers and having a laugh.

It was not without at least a small amount of trepidation that I headed for Maribor, having heard stories about their fans causing trouble in Wigan at the time of the game there. Someone posted on a bulletin board that he or some friends had been assaulted. Fans were warned to be careful.

As it turned out, there was nothing to worry about. Wigan’s official allocation for tickets, as per UEFA policy, was 600, but the local club released hundreds more when it became apparent the game would not be a sellout. In the end, more than a thousand Wigan fans travelled to see the game.

Some of them chartered an A-320 passenger jet to fly in the morning of the game and fly out again. Others paid big money to fly on the team plane, stay in the team hotel and attend receptions and other functions with the players. George and Zosia got a good deal from Air France and flew to Ljubljana, the capital of Slovenia, through Paris. Ana and I, as usual, flew on points to Graz, Austria, an hour’s train ride away from Maribor.

Zosia had done her research well and found a hotel located right on the square where the Wigan fans were to meet for a few pre-game drinks and a police escort to the ground, which was close by.

The police were prepared for trouble, wearing full riot gear, including helmets, body armour and shields. Unlike what seems to be happening on this side of the pond, however, they showed no attitude; indeed, they were quite friendly with the Wigan fans, showing a bemused tolerance for the increasing inebriation at the pre-game celebrations.

Hundreds of fans gathered at the square, drinking half-litre bottles of excellent Lasko beer (sold at an excellent price, too), the younger ones pounding down shots of Jaegermeister and generally getting potted. Football songs in support of the Latics (the team’s unofficial name) rang out throughout the square and were picked up by all and sundry. It was a happy drunkenness, though, and there was never a hint of trouble. 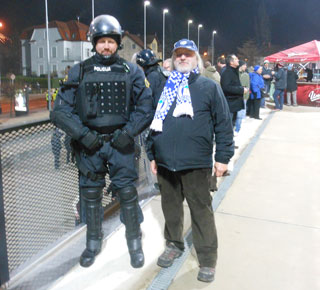 My new buddy outside the Stadion in Maribor. 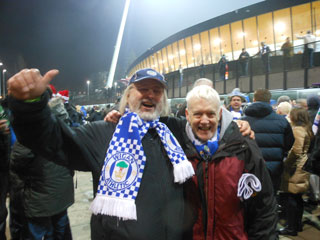 A couple of troublemakers in the Blue and White Army before the game.

A few NK Maribor fans braved the Wigan crowd to enjoy some pre-game drinks, and it was one of these who approached George and I as we stood with our beers. An older man with a few gaps in his teeth, he smiled and shook our hands as he spoke to us in Slovenian. We didn’t understand a word and we thought he was angling for us to buy him a beer. “No, sorry,” we said, shaking our heads. But it seems we had misunderstood. He left only to reappear with two beers for us and, after a lot of smiles, handshakes and pats on the back, he went on his merry way.

With the reports of past violence, we were glad to have a police escort to the stadium, which was only a few hundred yards from the square. People peered out of their balconies to wave to us as we walked down the street singing Wigan songs, although “bawling” might have been a more appropriate word to describe our lubricated efforts.

Once we reached the ground, George and I, in the spirit of goodwill with which the night had started, approached one of the cops and thanked him for the escort. He was quite friendly, chatting and agreeing to pose with us in his riot gear for a couple of snapshots.

In accordance with UEFA rules, no alcohol was allowed in the stadium. But by this time, the Wigan fans were primed and we didn’t need any to enjoy some of the hilarious chants and cheers, some of which probably shouldn’t be repeated here.

Victimized by the inexperienced Polish ref and crew, Wigan lost the game, but put in a great effort for their new manager, Uwe Rosler, in his first game in charge after replacing the hapless Owen Coyle. The team played the attacking, possesion-based passing style they had developed under legendary former manager Roberto Martinez. The quality of play from the second-division Wigan was more than head and shoulders above the dreck we Toronto FC fans have been forced to put up with. It was quite an eye-opener to see the skill of these players and the interaction with their team mates.

We were asked to stay for 15 minutes after the game to avoid any possible trouble from the home fans. But the only trouble we encountered leaving the stadium was being forced down a ramp and through a narrow gate in a steel fence. Although it was nowhere near as bad as it must have been at Hillsborough, it was still a bit disconcerting to be inexorably pushed from behind towards the fence, and I for one was glad to be out of there. Evidently, the police also saw no signs of trouble, and we made our way back to the square for more beer.

There, the really interesting part of the night began as George and I mixed with the Maribor fans. They were quite the opposite of what we had been warned against. We sat with three of them at a small table and talked about the world. Two of the fans were professional engineers who had whole or part ownership of their businesses, and they were worried about the increasing income gap between rich and poor in their country. I decided to directly attack the elephant in the room and asked them whether they thought they were better off under capitalism or their form of communism.

“What I know for sure is that whatever benefits capitalism has, it isn’t working,” said one. “Yes, you can see immediate rewards for your work if you start your own business, but then again you can fail. A lot of people aren’t suited for running a business. The standard of living is lower for many people in this country than it was under communism.

“Under communism, you just kept your head down and did your job, and everybody was OK. Nobody was rich, but most people were comfortable. Everyone was part of a big middle class. But now the middle class is disappearing and most of the people who used to be a part of it are poorer.”

His friend provided some interesting commentary on multilingual business in Europe. “When we are dealing with the Germans, we insist on doing business in English,” he said. “They are a lot bigger than us, and speaking English puts us on an equal footing.”

A young university student was also worried about the future and wondered if he would be able to stay in his own country.

The night ended in an increasingly blurry fog of hilarity and banter which being around football fans from England’s northwest is all about.