Today was a day for exploring the zocalo and surrounding area of Merida. The Yucatan Museum of Contemporary Art, the Catedral de San Ildefonso, the so-called Indian market, city hall and the state governor’s palace were on the agenda. The day was filthy hot, with temperatures approaching 40 in the bright sun. The short walk to the zocalo from our hotel was draining, especially given the detours we had to take to find a new memory card for our camera. 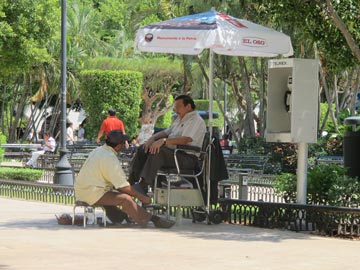 We toured several stores before stumbling onto a Sears near our hotel. I was able to buy a replacement 16-GB card for about $30. All of this took a bit of time, so that when we reached the zocalo (or Plaza Grande, as they call it), the sun was high in the sky. After we toured a sculpture garden in a passageway that, unfortunately, had a roof of glass which seemed to magnify the heat, the promise of air conditioning in the adjacent Gallery of Contemporary Art was just too good to pass up.

The gallery itself was a bit of a mixed bag. One room tried to tell the history of art in a space of about 50 x 20 feet. Naturally, it was a bit of a condensed history, shown with reproductions of famous paintings. Not until we got to the 20th century and the paintings of Diego Rivera and Frida Kahlo was there any mention whatsoever of Mexican art. Some of the permanent exhibits were powerful and masterfully executed, others left a lot to be desired in terms of artistic achievement — or so Ana told me.

But the fun part was the guards who showed us from room to room and actively engaged us in discussions about the paintings, telling us about the artists and showing an obvious pride in the accomplishments of the Mexican painters. We could understand about half of what they said, but no matter: their enthusiasm was infectious.

As we exited the exhibit area and got back into the heat, we both started feeling a little dizzy; time to sit down and have an ice-cold fruit bar and a drink. While we were sitting in the gallery cafe, the owner of the souvenir shop next door, who had been trying to get us to come into his store, pounced upon us and joined us at our table, telling us that the heat wave we were experiencing was unusual for this time of year. After several minutes of friendly conversation, he left us with a subtle hint to drop into his store later.

Photo gallery: Around the Plaza Grande

Next stop was the cathedral, the oldest in North America. It frankly wasn’t much to see, especially since the statues, including the famous “Jesus of the blisters,” were covered for Lent. For me, the cathedral was repugnant in that it was constructed from stone stolen from the Mayan temples that the conquistadors destroyed. In all the history of humankind, the Spanish occupation of Mexico from the 1500s to the 1800s has to be on par with the cruelest misery inflicted on a population.

As we were leaving, we were approached by another Mexican man, who spoke to us in good English. He said he worked for a cell phone company and was on his lunch break. We got to talking and he told us about the Indian market a few blocks away where, he said, we could buy authentic Mayan handicrafts. He even led us to the place, although he said he didn’t have time to come in with us. If he was a tout, he had the most subtle approach I have ever seen.

The market was fascinating and had some beautiful examples of Mayan artisanal work, from plates, to small statues carved from limestone, to beautifully intricate masks and, finally, some exquisite Panama hats and clothing made from sisal. The salesperson who latched onto us got enthusiastic when he saw we were interested in his culture and gave us a rundown of the techniques and the artists, all in excellent English. We left somewhat lighter in the wallet, with a small jaguar sculpture, a Panama hat and a guayabera shirt, the latter two made from 100% sisal fibre.

Lunch in a Mexican restaurant was tacos al pastor for me and what Ana described as a pound of delicious, melted Oaxaca cheese in a bowl, chock full of mushrooms. Our waiter, who bore an uncanny resemblance to my late Uncle John, laughed and joked with us. The meal was accompanied by no less than five bowls of salsa, one of which, the server warned, was extremely hot. He was true to his word. My tacos were filled with thin slices of delicious, tangy barbeque pork. I ordered what I thought was a side salad and was served an enormous plate of fresh vegetables topped with what seemed to be an entire chicken breast. I could eat only half of it.

As long as I’m talking about food, I should describe our fabulous dinner at Amaro, a mostly vegetarian restaurant near the zocalo. We started with some superb gazpacho. I had enchiladas stuffed with tofu and mixed vegetables, topped with a spicy salsa verde. Ana had a burrito, equally good. Again, our waiter was chatty and funny, and we took it as a complement that he spoke to us in Spanish throughout the meal. Unfortunately, we couldn’t understand everything he said. But we’re getting there. The setting was a beautiful candle-lit patio, with live guitar-and-vocal music that was not so loud as to prevent conversation.

Afterwards, we walked to the zocalo for delicious, home-made gelatos at El Colòn, an establishment that was founded in 1912 and is still going strong. We enjoyed sitting outside in the arcade, people watching and enjoying our desserts.