We know it as Chichen Itza but according to our Mayan guide Victor, that’s not its real name. It’s the name that was given to the ancient city by North American archeologists, based on their studies of the material available — which is not much, given that a Spanish priest was responsible for destroying over 5,000 Mayan scrolls that contained an incredible font of Mayan knowledge. 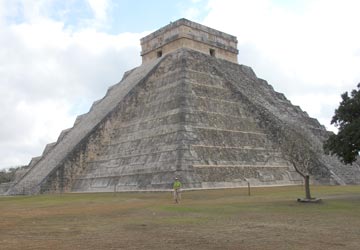 Ana is dwarfed by the massive El Castillo pyramid at Chichen Itza.

Instead, Victor thought the city was called (pardon the spelling) Ujap-me. It was one of several points on which Victor seemed to disagree with the acknowledged North American experts on Mayan culture. Victor was trained in archeology at the university in Mérida. But a lot of his knowledge of the ancient Maya comes from the oral history which is still passed down from generation to generation.

For example, he learned from his grandfather that certain crops should be planted at the time of the full moon because the tides are higher at full moon, and they feed the underground aquifers which in turn feed the cenotes the ancients used as wells, and when the tide is high, more water gets into the system.

Similarly, Victor doesn’t think the Mayans used human sacrifice until they intermixed with the Toltecs, a much more warlike people. He thinks the Toltecs killed off the Mayan upper classes in order to take over the rich Mayan cities. Since the upper classes were the repository of all Mayan knowledge — knowledge they jealously guarded from the lower classes — their demise led to the collapse of Mayan civilization as it was known then. There are still more than a million people who count themselves of Mayan descent, making them the largest aboriginal group in the world. But at the height of their civilization, he estimates there were more than 20 million people in the Mayan lands.

Seeing Chichen Itza, or Ujap-me, is an incredible experience in itself. But with Victor as a guide, it took on a whole new dimension which brought the ancient civilization to life. It was plain that for Victor, modest as he was, his study of his ancient ancestors was more than a dry investigation into history.

He started by showing us the sac-be, or white roads, that the Mayans used to travel hundreds of miles on foot. Although they knew about the wheel, they did not use it, except on children’s toys. They didn’t have the animals to pull a cart, for one thing, and they thought the wheel was a sacred object. Instead, they avoided the heat by travelling over the white roads at night, using the full moon to light their way. Like many of the modern souvenir sellers, they carried cargo on their heads. In so doing, they managed to build a trading network that extended hundreds of miles. A common trade route, for instance, was between Tulum, south of Cancun, and Chichen Itza, a distance much farther than the several hundred kilometres we travelled yesterday by bus.

El Castillo, the iconic and huge pyramid that dominates Chichen Itza, served as a calendar as well as a temple. Its walls are punctuated with square cutouts which, when totalled and combined, represent units of time in the complex Mayan calendar. Its alignment is so precise that at dawn and sunset during the spring and fall equinoxes, the sun illuminates a clever optical illusion that makes it look as though the feathered snake god Kukulán is slithering down the pyramid towards a sacred well, where it fertilizes the surrounding land. The effect was built in to the design of the pyramid with stone ridges along its angles. The ridges reflect the sunlight in turn as the sun rises, until the head of the snake god is lit up at the bottom.

Click on a thumbnail below to launch the slideshow. As usual, I went a bit overboard with the photos. 😉

The alignment of this pyramid and two other, smaller structures is so precise that if you stand in the middle of the three and clap, the sound will echo back to you in the form of a strange noise that mimics a bird call and repeats a number of times as the sound of your clap reaches various points on the incline. This phenomenon is repeated in the ball court, where a clap as you stand by one of the two long walls which form the sides of the rectangle echoes 13 times, as measured by equipment that was brought in by archeologists from Mexico City. Most people can hear only seven echoes but the equipment confirmed there are 13. We learned from Victor’s explanation that the widely-reported phenomenon where a whisper can be heard at the other end of the playing field, some several hundred feet away, was designed so that the king could issue instructions to the referees and judges.

Until the Toltecs took over, Mayan sacrifices were animal in nature. But in the later eras of their civilization, Victor told us, it was considered an honour to be sacrificed. The victims were chosen exclusively from the upper classes, based on their date of birth. If you were born on a sacred date, you were brought up with the knowledge that your destiny was to have your heart ripped out of your living body at the top of the Temple of the Warriors. Just before the big day arrived, you were sequestered and prepared. The willing victims were fed Mayan liqeurs, probably hallucinogenic, and thoroughly cleansed. Then their spines were broken, which allowed the sacrifice to take place without the victim feeling any pain. Their chest was opened with an obsidian knife and the heart was lifted out, to be placed in a bowl on the stomach of the reclining god Chacmool.

Victor gave us a three-hour tour for two at a cost of $75, then introduced us to a carver he knew, where we bought a mask, carved in cedar, of Cha’ac, the god of rain and thunder. Cha’ac’s nose can be removed to point either up of down: up to pray for rain, down to give thanks for it. It will adorn our garden and hopefully provide some relief in our dry summers.