Getting there is half the fun

Today was a day totally devoted to travel, and quite an interesting one at that. Landing at the Cancun airport, we found there was only one bus per day to Chichen Itza, and it left from the city-centre terminal very shortly after we arrived at the airport. We decided to take a second-class bus to Piste, a small town of 12,000 about 6-7 kilometres from the site.

The driver told us it would take three hours to get to Piste. I guess that was in Mexican time. 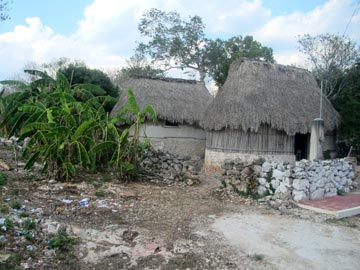 Traditional Maya huts like the ones above are gradually being replaced with sturdier - and cooler - structures made with concrete blocks and stucco (below). 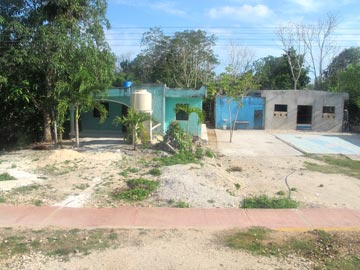 One house finished and one in progress.

The bus was comfortable enough, but stopped to pick up passengers at a multitude of stops in Cancun and at every village along the way. We took Highway 180, the two-lane road that leads to Mérida from Cancun. Between the stops, the speed bumps in every village and the frequent short detours to serve communities near the highway, the trip took four and a half hours, longer than it took us to get to Cancun from Toronto. But as with other second-class bus services we have taken in Mexico, the trip showed us several slices of life.

A wizened old man helped me load our luggage into the bottom of the bus without any prompting. He did not seem to be an employee of the bus company, but perhaps a frequent commuter on the route. It was difficult to converse with my limited Spanish, but he seemed to latch on to me when he saw we were unfamiliar with the procedures at the Cancun station. The luggage-bay door did not respond to his ministrations, and we couldn’t get it closed. He asked the bus driver for help. The driver kicked the latch closed and laughed about how you needed the right touch. It was typical of the way a lot of Mexicans seem to respond to adversity.

Once underway, the Americanized parts of Cancun we saw from the airport bus soon gave way to crumbling neighbourhoods where small workshops and auto-repair places were thrown in helter-skelter with restaurants, drugstores hair salons, houses and Mexican fast-food joints. The streets were sun-baked and dusty, with barely a blade of grass to soften the total immersion in concrete and asphalt. Old cars and scooters vied for space with smoke-belching trucks and rattletrap public-transit buses. Whole families rode helmetless on motorcycles. Men in undershirts lounged by the side of the road. Houses were stuck between factories and warehouses, their back yards giving onto the busy streets.

Pictures from a second-class bus

As our bus wound its way along Highway 180, we passed through many small Maya villages. Click on a thumbnail to start the slide show.

As the bus made its way from Cancun, we passed through many Mayan villages. They were interesting-looking places. Each village had its school and central park. Interestingly, taxis seemed to be a major mode of transport; even the smallest places boasted a taxi stand. Often, there would be a police booth at each end of the village. And, of course, there were the speed bumps, huge mounds that forced our bus to proceed very slowly and gingerly through the settlements.

Some of the houses were traditional Mayan huts, with walls made of the trimmed trunks of the slender trees that grew in the ever-encroaching bush and roofs made of thatch from palm trees. We later learned that these huts are oval in shape, with the narrow ends facing the direction of hurricane winds, presenting a streamlined shape that prevented hurricanes from destroying them. That was in the old days, when hurricanes were not nearly so powerful as they are now, according to the Mayan guide who later took us through Chichen Itza. 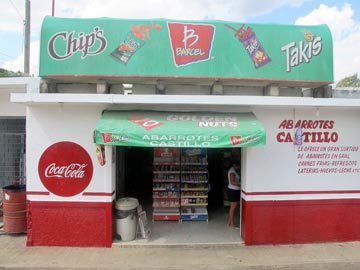 Beside many of the houses were newer ones in various stages of construction. These were made of concrete blocks which were later covered with stucco. Our Mayan friend later explained that people preferred them because they were cooler.

Many of the houses had small nurseries attached, where their owners sold tropical houseplants to people driving along the highway. Their kitchens were in outbuildings, often without walls, and we also saw people cooking on outdoor fires. There was also a fair amount of wood burning going on as people cleared their small patches of land.

Ana remarked there seemed to be no crops being grown, but we later learned from our Mayan guide that the fields were farther from the road. The farmers used to burn fields right beside the highway to crow corn, beans and other crops, but this created a safety hazard for motorists, so the fields were moved farther away. (Later in our trip, we saw this phenomenon along the Ruta Puuc.)

As in past second-class trips, food vendors would get on at various stops and roam through the bus selling selections of sandwiches, fruits and vegetables. We bought sweet-tasting buns, mine filled with ham and cheese, from a striking Mayan woman whose face in profile bore a strong resemblance to ancient illustrations of their civilization. Other vendors sold cucumber slices sprinkled with chile powder (a favourite from a previous trip 12 years previously), fresh mango, papaya and melon slices and various kinds of pastries. All of them were incredibly cheap; my sandwich ran 20 pesos, or less than two Canadian dollars.

When we stopped at Valladolid, I witnessed a bus accident. Two buses were backing out of their platforms at right angles to each other and collided at low speed, resulting in a broken window on one and a dent in the other. The accident was an occasion for about a dozen employees of the bus company to gather round, laughing and pointing at the damage. It was another example of the easygoing attitude of many Mexicans.

When we finally arrived at Piste, we felt as though we had had a good introduction to the contemporary Mayans. Our six-kilometre taxi ride cost a grand total of a bit less than $7 CDN.

Our hotel at Chichen Itza, the Villas Arquelogicas de Chichen Itza, was in a beautiful setting in the forest, with a central courtyard containing a pool and restaurant. Our room was fairly luxurious and, at about $70 Canadian, was quite reasonably priced. In the morning, it was a five-minute walk to the site.