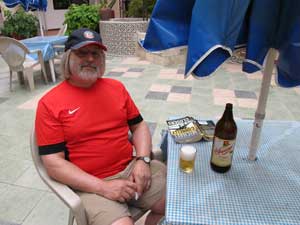 Relaxing at the Delores Alba, our $50-a-night hotel in Merida with a $2 bottle of pretty decent beer. 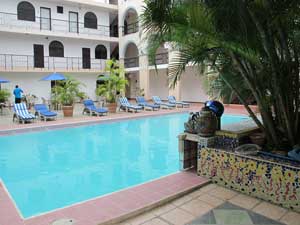 Cheap hotels have swimming pools too! 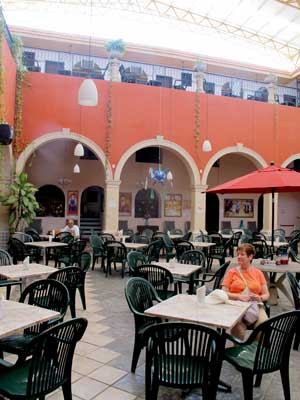 The courtyard where our hotel provided a free breakfast. 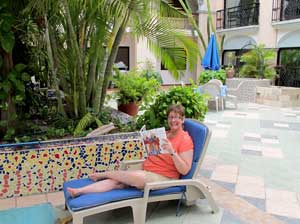 Relaxing in our Merida hotel.

It had been 10 years since we spent a month in central Mexico, ranging as far north as Guanajuato and as far south as Oaxaca. So we figured it was time to revisit this fascinating country. This time, we had 10 days and decided to spend it looking at Mayan history in the Yucatan. Landing in Cancun (because that’s where Air Canada had non-stop service), we got the airport bus to the downtown terminal and caught a bus to Chichen Itza. The next day, we caught another bus to Merida, where we stayed a week with a few side trips. Finally, we took the bus to Campeche, where we visited the Mayan ruins of Edzna and took in the beautiful centro historico of this smallish city.

It was a great trip. Like last time, we had fun travelling by bus, although the flat scrub of the Yucatan can’t begin to compare with the mountains of central Mexico for scenery. Like last time, the people were friendly, honest and welcoming. We learned more about Mexico’s amazing history and culture and felt by the end of it that we could appreciate the country just a bit more than when we arrived. My Spanish — which is still not good — improved markedly and I was able to understand a lot more of what people said. The food was amazing and a special treat for Ana, who had assumed before we left that she would have a hard time as a vegetarian. Everything — restaurants, our hotel rooms, public spaces — was spotlessly clean. Although some of the neighbourhoods we walked through would look dodgy to a middle-class North American, we never felt physically threatened in any way.

Unlike last time, things were extremely cheap, as opposed to reasonably cheap. If memory serves me correctly, in 2002 we got four or five pesos for our dollar. Last month, we got nearly 12. It’s possible this currency devaluation has goosed the economy; it’s hard to tell. But when a decent hotel room is less than $50 per night and two people can get stuffed at an excellent restaurant for $30, it adds up to a pretty cheap vacation. We seem to have travelled for under $100 a day each, not including airfare.

The only really inconvenient thing about Mexico seems to be their internal air transport system. To fly from Campeche to Cancun, which would have saved us a seven-hour bus trip, would have meant going to Mexico City and getting a connecting flight, for a total travel time of up to 14 hours. I could find only one flight per day from Merida to Cancun, that in a small plane and costing hundreds of dollars. The bus system does make up for it, but it takes time to go overland on highways that are not particularly conducive to bus travel.

While we’ve graduated from backpacking, we haven’t gone too far up the ladder. It seems we have to bring more stuff with us as we get older; it must be a greater sense of insecurity, or perhaps an insistence on creature comforts we could once do without. And we now stay and eat at better places than we did 20 years ago. But we still find satisfaction in finding our own way around and interacting with the locals as we do so.

Will we go back? It’s almost a certainty. A new friend we met during the course of our trip highly recommended Villa Hermosa, Palenque and San Cristobal, so who knows, we may end up there again soon. I’m already looking forward to it.