Arriving in Wigan after an overnight flight to Manchester for the FA Cup final in May, 2013, I had the best of intentions: get to bed around 10:00, sober, and get a good night’s sleep before the big game the next day. Of course, it didn’t work out that way. 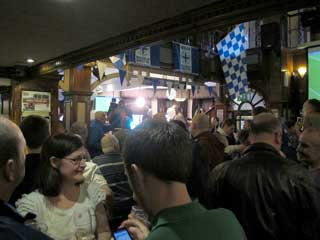 The crowd at the Berkeley in Wigan centre, the night before the FA Cup final. 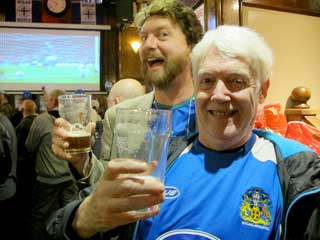 Jim (left) and my "cousin-in-law" George, hamming it up at the Berkeley.

I always enjoy a pint with our buddy George, husband of Ana’s cousin who lives in Wigan. I guess that makes him my cousin-in-law, if there is such a thing. George and his son Stefan are both big Wigan fans; in fact, I credit my support for Wigan to Stefan, who, during his time in Canada, told us about the club (then in the third division) and urged me to become a fan if I started watching English football.

Arriving by train from the Manchester airport, we walked into a rally for the team at one of the town’s two railway stations. After a good-natured half hour, we headed in to our hotel for a nap, until we realized there was not enough time before we met George at 3pm. George is a prominent Wigan supporter and a full-fledged member of the Supporters’ Club, so he was up on all the pre-game activities. One of these involved being the studio audience, in a pub in the town centre, for BBC North West Tonight, a live regional show which featured the fans of the two teams — Wigan Athletic and Manchester City — in their respective cities.

The FA Cup seemed hardly to have made a dent in Manchester; even the announcer, when he wasn’t on the air, alluded to the dead atmosphere in the pub from which they were broadcasting in Manchester. But at the Berkley Square pub in Wigan, that was not the case at all. Latics fans were crammed into the beautiful old pub, singing, making noise and generally having a great time.

George, who seems to know almost everyone in Wigan, introduced us around. We were quite the curiosity for the Wigan fans, as members of the Toronto Wigan Athletic Traveling Supporters, a club whose acronym got appreciative howls of laughter from all and sundry.

One fellow, perhaps not mindful of today’s sensitivities, dyed his hair blonde and put on blackface to show his support for the club’s leading striker, Aroune Kone. He led chants for the player throughout the evening. Others sang songs we hadn’t heard before. My favourite, to the tune of the chorus of “Sloop John B,” went like this:

By the time the crowd started thinning out, long after the BBC show had finished, we were, as the saying goes, quite knackered, enough so that the earlier resolution of an early night was blown away like rubbish in the streets. One thing I’ve noticed if you spend a sleepless night on a plane is that drinking beer the next day wakes you up. OK, the first one or two make you want to sleep, but after that the sugar takes over.

So it was off to the John Bull Chop House to meet some new friends. Amazingly, the bartender remembered us from our visit the year previous, when we had seen Wigan go down to a lacklustre defeat against Swansea City. Our evening at the Bull is described in another post. George had the sense to leave by 11 or so and get the last train home. We, a short walk from our hotel, displayed no such sense. I finally left at about 1:00, but Jim stayed until 2:00 or later.

The next morning wasn’t really pretty, but we had to be at the front door of the hotel before 9:00, where George and Stefan picked us up for the trip to the DW Stadium, the Latics’ home. Dozens of buses waited to take Wigan fans to Wembley Stadium. Another word here about George: we can’t say enough about how he arranged everything for us, paying in advance for our tickets both for the bus trip and the game. The damage, when it came time for payback, was £100 each for both the game and the trip. The game itself, in the upper level of the stadium, cost £65, a pretty good price for a ticket to one of the world’s major sporting events and a much better deal than paying the same price for a thuggery-filled and meaningless pro hockey game.