Above: Wigan fans were already celebrating their team’s performance at half time in Wembley Stadium.

FA Cup day: May 11, 2013. It dawned cold and wet in Wigan and we waited in a light drizzle outside the DW Stadium with fans who lined up to board what looked to be more than 50 chartered buses. 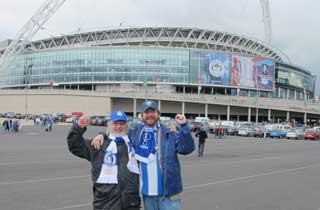 Members of the Toronto Wigan Athletic Travelling Supporters are pumped for the FA Cup final at Wembley Stadium.

In Canada, we don’t think of a trip of about 200 miles as a big deal. But in Britain, it is. While a Canadian bus wouldn’t have made any stops on the way, ours made two: one for a meal break at a service centre along the motorway and another to get gas. I’ve never been on a bus that had to stop for gas before. The driver kindly informed us that it was about £150 to fill the tank.

The service centre itself, where, the driver told us, buses from both teams made compulsory stops, was as crammed as I’ve ever seen such a facility. But there was no animosity between the fans of the two teams, who were mixed among each other in the huge lineups for washrooms and food.

The import of the day began to make itself evident as we got nearer the stadium and the children on board got very excited, cheering loudly at every sight of the immense edifice. “Wem-be-lee!” shouted one again and again as we got nearer. Others ooh-ed and aah-ed, commenting on its size. While shrines to other sports, such as the old Maple Leaf Gardens and Montreal Forum, inspire awe in our children, we have nothing like the tradition of Wembley and the great football events which have taken place there. Even as a new building, the stadium drips of tradition and purpose.

As we neared the parking lot, I learned about a British hobby (perhaps “obsession” is a better name) that was new to me: coach spotting. You’ve undoubtedly heard of train spotting, where railway aficionados stand on platforms noting engine and car numbers. Coach spotting is the same thing, except with buses. Whole families waited on lawn chairs in the rain as fathers wrote the details of each bus in their notebooks. Some families operated as a team; one or two noted details and another took photos with a long lense. Later, they would upload their findings to a national coach-spotting website, where they could trace the path of each bus, as long as other coach spotters had entered the bus’s previous trips. 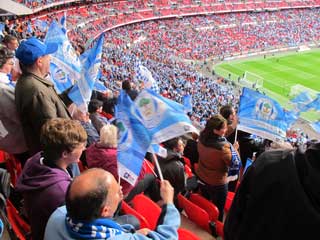 As the stadium filled, Wigan supporters warmed up their voices.

Having taken close to five hours to go the 200 miles from Wigan to London, there wasn’t time to do much before game time. We walked partway around the stadium, but it was cold and wet. So we went to a pub reserved for Latics fans to have a couple of pints. In fact, it wasn’t really a pub, more a nightclub which had been commandeered for the occasion. The downstairs being full, we were shunted upstairs, where trestle tables were set up to dispense beer and soft drinks. There were probably close to a thousand people in the club.

Once again, George introduced us around and we made some more friends. The Aroune fan was back but not, it seemed, in blackface. More jocular banter revealed our new friends knew someone who had flown in from South Africa, arriving the morning of the game and returning immediately afterwards. Supporters practiced their songs and got their faces painted with the team crest. Children kicked a smallish ball around between adults drinking their cans of reasonably-priced beer.

Entrance to the stadium was through a series of computer-controlled gates which allowed only one person at a time to enter from each gate. Once inside the stadium, courteous security guards checked backpacks and directed people to the right place. We went up — way up — to our seats which, despite being the equivalent of eight storeys above the pitch, provided a fantastic view. We were just below the partial roof, and it was windy and cold. But at least we didn’t get soaked from the deluge which later inundated those who had bought the £100 tickets in the uncovered lower decks.

Most of the pre-game fun was in seeing the fans pour in and warm up their voices. The pre-game show on the pitch was a little tacky in its bad imitation of an NFL extravaganza – NFL shows also tacky, but they’re better produced. But the game itself was one of the most entertaining I’ve been to (of course, that’s in comparison with our own hapless Toronto FC) and certainly ranks among the best I’ve seen on TV.

The Latics played a smart tactical game, led by their manager Robert Martinez. Rather than sit back and wait for Man City’s pressure, they themselves pressed up the pitch and their speedy wingers and midfielders caused problems for City the whole game. Joel Rodles, the Wigan keeper, made a fantastic stop in the first half, right below our seats, to keep the game scoreless. There were chances at both ends in a thrilling game.

But in the end, when the game was into stoppage time, Ben Watson came through with what would be the most famous goal in Wigan Athletic’s history, directly below our seats. The Wigan fans went crazy. We had all come to the game expecting a good time and proud of the little team that could, determined to enjoy the day even if we did end up losing to the richest team in the world. The realization that little Wigan had won the FA Cup set off a spark of happiness that soon turned into a conflagration of utter joy. All 25,000 of the Wigan fans stayed for 15-20 minutes after the game, singing and cheering their hearts out.

The trip home was much quicker than the trip out, but it was still 1am by the time we reached Wigan. I went right to bed but Jim stopped in at the John Bull Chop House, which was supposed to be open until 2:30 for the big game. He was disappointed to find almost all of the beer and liquor had been sold. The bar was down to a fraction of a keg of an unpopular brand. Phil the bartender told him it was a party to remember. Indeed, almost all of the rest of the town’s bars had closed, out of beer and booze.

Attending the FA Cup was a childhood dream. I can remember watching it on a foggy black-and-white set when I was 6 or 7. Along with seeing Cappadocia, I’ve now done two on my list. It was an experience for a lifetime.

My only regret was not being part of the celebration in Wigan itself. That and missing the parade a week later.